The 16th arrondissement of Paris (also known as "Arrondissement de Passy") is one of the 20 arrondissements (administrative districts) of Paris, the capital city of France. It includes a concentration of museums between the Place du Trocadéro and the Place d'Iéna.

With its ornate 19th century buildings, large avenues, prestigious schools, museums and various parks, the arrondissement has long been known as one of French high society's favourite places of residence (comparable to New York's Upper East Side or London's Kensington and Chelsea)[2] to such an extent that the phrase "le 16e" (French pronunciation: ​[lə sɛzjɛm]) has been associated with great wealth in French popular culture. Indeed, the 16th arrondissement is France's fourth richest district for average household income, following the 8th, 7th, and 6th arrondissements; with the south of the 17th arrondissement and Neuilly-sur-Seine, they form the most affluent and prestigious residential area in France.

The 16th arrondissement hosts several large sporting venues, including: the Parc des Princes, which is the stadium where Paris Saint-Germain football club plays its home matches; Roland Garros Stadium, where the French Open tennis championships are held; and Stade Jean-Bouin, home to the Stade Français rugby union club. The Bois de Boulogne, the second-largest public park in Paris (behind only the Bois de Vincennes), is also located in this arrondissement. 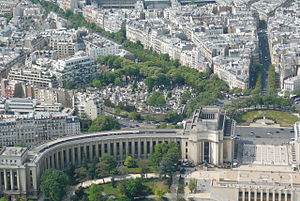 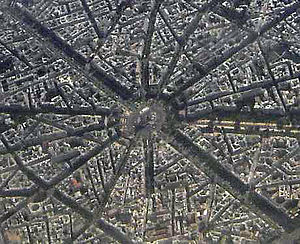 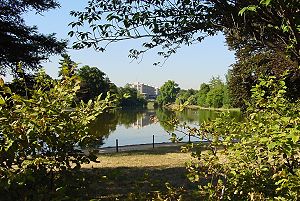 The 16th arrondissement is commonly thought to be one of the richest parts of Paris (see Auteuil-Neuilly-Passy), and features some of the most expensive real estate in France including the famous Auteuil "villas",[3] heirs to 19th century high society country houses, they are exclusive gated communities with huge houses surrounded by gardens, which is extremely rare in Paris. It is also the only arrondissement in Paris to be divided into two separate postal codes. The southern part of the arrondissement carries a postal code of 75016, while the northern part has the code of 75116.

At one time Aérospatiale had its head office in the arrondissement.[8][9]

Movies filmed in the 16th arrondissement

In one of the opening scenes of the 1965 James Bond film Thunderball, character Emilio Largo is seen arriving at the headquarters of The International Brotherhood for the Assistance of Stateless Persons. This scene was shot on Avenue d'Eylau in the 16th arrondissement.[10]

The controversial 1972 film Last Tango in Paris, starring Marlon Brando and Maria Schneider, was filmed at various locations in the 16th arrondissement, with the apartment the characters stayed in being located in Passy.[11]

A notorious serial murder case, which generated an international media circus, centered in the 16th arrondissement during the Nazi occupation of France during World War II. The focal point of the case was French doctor Marcel Petiot, who in 1941 bought a house at 21 Rue le Sueur in "the heart of Paris's fashionable 16th arrondissement".[12] On 11 March 1944, Petiot's neighbors complained to police of a foul stench in the area and of large amounts of smoke billowing from a chimney of the house. Fearing a chimney fire, the police summoned firemen, who entered the house and found a roaring fire in a coal stove in the basement. In the fire, and scattered in the basement, were human remains.[12] Following an investigation, during which time Petiot attempted to evade capture, "the monster of rue Le Sueur" was ultimately arrested and went on trial on 19 March 1946, facing 135 criminal charges. He was convicted of 26 counts of murder and sentenced to death. On 25 May, Petiot was beheaded, after a stay of several days due to a problem in the release mechanism of the guillotine. [12][13][14] 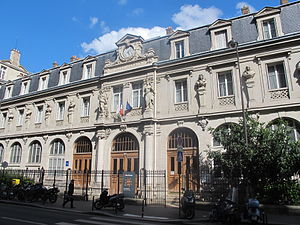 Here is a list of high schools in the arrondissement

The Colegio Español Fecerico García Lorca, a Spanish international primary school owned by the Spanish government, is located in this arrondissement.[15]

The Université Paris-Dauphine is in the arrondissement.

The two campuses of the International School of Paris are in the arrondissement.[19]

The renowned "classes préparatoires" establishment Intégrale : Institut d'enseignement supérieur privé have one of their campuses in the arrondissment.[20] 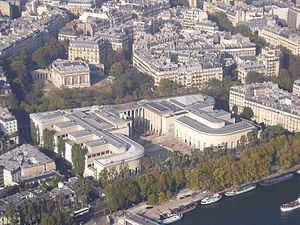 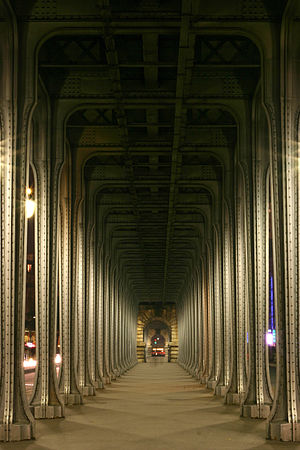