Activated in July 1942, the 306th Fighter Squadron was an advanced pilot training squadron, assigned to III Fighter Command at Dale Mabry Army Airfield, Florida. The 306th was an Operational Replacement Unit (OTU) which trained newly graduated pilots in combat fighter tactics with graduates being assigned to operational squadrons for combat in overseas theaters. Initially equipped with the P-39 Airacobra, later using P-47 Thunderbolts and P-51 Mustangs when they became available. Disbanded in May 1944 as part of a reorganization of Army Air Force training unit designations. 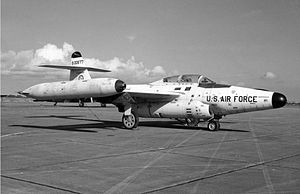 The 176th was gained by Air Defense Command (ADC) with an air defense mission of the Great Lakes, Chicago and Wisconsin. Upgraded to F-80A Shooting Star jet aircraft in 1949. Was re-designated as the 176th Fighter-Interceptor Squadron in November 1950 and 10 of the unit's 25 Mustangs were shipped to Korea in support of the Korean War effort. Federalized during the Korean War in February 1951, but remained at Truax Field where it flew air defense training missions. During the active duty tour, the 176th FIS converted its aircraft to the F-89 Scorpion. They became the first Air National Guard unit to fly the modern jet fighter. Returned to Wisconsin state control in February 1952 and converted back to the F-51 Mustang.

In October 1953, The 176th FIS converted from F-51's to the F-86 Sabre, and the squadron performed summer training with the F-86 was at the Alpena Training Center in Alpena, Michigan in 1954. In October 1954 The 176 Fighter Squadron was reassigned the F-89 Scorpion, which they had flown briefly in 1952 during the unit's Korean War activation. The aircraft, designed as an "All Weather" fighter interceptor, carried a pilot and radar operator. 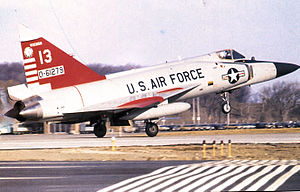 On 15 April 1956, the 176th FIS was authorized to expand to a group level, and the 115th Fighter-Interceptor Group was established by the National Guard Bureau at Truax Field. The 176th FIS becoming the group's flying squadron. The Group continued its air defense mission with summer training moved to Volk Field from 1956 to 1962. Beginning in 1963, training moved to "year around" training. In January 1960 F-89 crews were put on active duty status and the unit was assigned an around-the-clock runway alert commitment of two armed aircraft. Along with this commitment came the F-89J with an armament platform that included the AIR-2 Genie. The AIR-2A was the first US air-to-air rocket with a nuclear warhead. In early 1966 the squadron turned in their F-89's for the F-102 Delta Dagger.

In May 1966 the 176th FIS replaced their F-89's with the Convair F-102 Delta Dagger. In the spring of 1967 after a period of re-training in the new supersonic interceptors, the 176th FIS resumed its air defense "runway alert" mission. One year later in June 1969, the unit airlifted to Gulfport, Mississippi for summer training, ending six years of "year around" training at home base.

In November 1974, the squadrons parent 115th Fighter-Interceptor Group was transferred from Air Defense Command to Tactical Air Command(TAC). In addition the 115th's status was elevated from a group to a Wing, its designation being changed to the 128th Tactical Air Support Wing in a re-alignment by the Wisconsin National Guard Bureau.

The squadron was re-designated as the 176th Tactical Air Support Squadron (TASS), and in December 1974 the unit's F-102's were replaced by the Cessna O-2A Skymaster Forward Air Control (FAC) aircraft. The O-2 was the military version of the Cessna 337 Skymaster, a high wing, twin boom aircraft with a unique centerline pusher/tractor twin engine configuration. The O-2A version, used by the 176th TASS, was used in forward air control, (FAC), missions, often in conjunction with a ground FAC & ROMAD, (radio operator, maintenance, and driver), team.

In November 1979, the O-2s were replaced by the OA-37B Dragonfly Forward Air Control aircraft. It was developed from the A-37 light attack aircraft which was used extensively in the Vietnam War as a counter-insurgency aircraft, with the surviving aircraft either being sold to the South Vietnamese Air Force or returned to the United States. The OA-37s were received from ANG units in Maryland and New York.

With most of the pilots and maintenance crews having prior jet aircraft experience with the F-102's, the unit was able to transition the OA-37 to C-1 status, (full combat ready), in less than six months. Awards during the OA-37 era included an overall rating of "Excellent" in the unit's Operational Readiness Inspection (ORI), the Distinguished Flying Award and their first Air Force Outstanding Unit Award.

On 1 October 1981, the 176th TASS was redesignated the 176th Tactical Fighter Squadron (TFS). Along with the mission change came a new aircraft, the A-10 Thunderbolt II, nickname "Warthog", with the OA-37s being sent to other ANG units. For survivability made the A-10 an excellent weapons delivery system for ground targets. The A-10's most dominant feature is its seven barrel GAU-8/A 30mm cannon, capable of firing at up to 70 "tank busting" rounds per second.

During the A-10 era the unit received two "Outstanding Unit" Awards, three Air Force Flight Safety Awards, and in 1991 an "Outstanding" in its Unit Effectiveness Inspection (UEI). Deployments with the A-10 included Operation Coronet Cove to Panama, and "Checkered Flag" missions to NATO bases in West Germany and England. 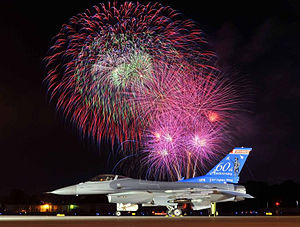 With the end of the Cold War, the early 1990s marked several changes. On 16 March 1992 the 176th Tactical Fighter Squadron (TFS) was redesignated the 176th Fighter Squadron (FS) as its parent 128th Tactical Fighter Wing became the 128th Fighter Wing. The 128th FW implemented the Air Force Objective Organization, which established the 128th Operations Group to which the 176th FS was assigned. Also occurring at this time was a command change from the Air Force's Tactical Air Command (TAC) to the newly created Air Combat Command (ACC).

In 1993 the 176th FS began transitioning from the A-10A to the F-16C/D block 30 Fighting Falcon airframes with the enlarged inlet, with the A-10s were transferred out to other ANG units. The first F-16s arrived at Truax ANGB on 1 April 1993. The current role of the 176th FS is air-interdiction and close air support (CAS). This was the same task as when they flew the A-10. Although the transition to the F-16 meant a huge change in the overall execution of this mission when comparing the A-10 with an F-16.

On 11 October 1995, the squadron was reassigned to the new 115th Operations Group when its parent 128th Fighter Wing was re-designated back to the 115th by the Wisconsin National Guard Bureau. The 128th designation was causing confusion with the 128th Air Refueling Wing at General Mitchell ANGB, another Wisconsin Air National Guard unit.

In October 2008, the squadron celebrated its 60th Anniversary. 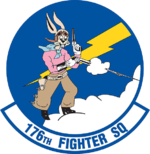 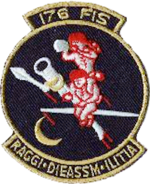