From Infogalactic: the planetary knowledge core
Jump to: navigation, search
This article is about the year 1830. For the board game, see 1830 (board game). For the computer game, see 1830: Railroads & Robber Barons.

1830 (MDCCCXXX) was a common year starting on Friday (dominical letter C) of the Gregorian calendar and a common year starting on Wednesday (dominical letter E) of the Julian calendar, the 1830th year of the Common Era (CE) and Anno Domini (AD) designations, the 830th year of the 2nd millennium, the 30th year of the 19th century, and the 1st year of the 1830s decade. Note that the Julian day for 1830 is 12 calendar days difference, which continued to be used from 1582 until the complete conversion of the Gregorian calendar was entirely done in 1929. It is known in European history as a rather tumultuous year with the Revolutions of 1830 in France, Belgium, Poland, Switzerland and Italy. 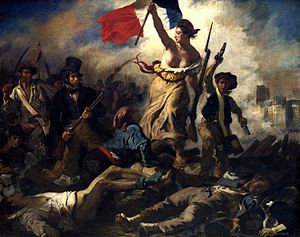 Franz Joseph I of Austria