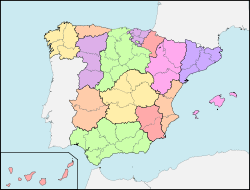 Map of the 1833 territorial division of Spain into regions (colored) and provinces (outlined). 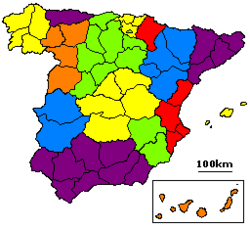 Map of the similar 1822 territorial division of Spain. The 1822 division did not mention historic regions; the colors are matched to the map above solely for ease of comparison.

The 1833 territorial division of Spain divided Spain into provinces, classified into "historic regions" (Spanish: regiones históricas).[1] Many of these regions correspond to present-day autonomous communities of Spain[2] and nearly all of the provinces retain roughly or precisely these borders,[2][3] although five provinces have changed their names to reflect local languages other than Castilian Spanish[4] and three to match the name of a coterminous autonomous community.[5][6][7][8]

Immediately after the death of King Ferdinand VII on 29 September 1833,[9] the regent Maria Christina attempted to find a moderate third way between the absolutist Carlists—the followers of the Infante Carlos—and the liberals. This mission was given to First Secretary of State Francisco Cea Bermúdez, leader of a government that lasted only into the following January, having been unable to satisfy either side, let alone both. Despite his vain efforts to gain the support of either the liberals or the Carlists, his government undertook a major reform of the territorial division of Spain whose effects are still felt after more than a century-and-a-half: the division of Spain into provinces.[10][11]

A royal decree of 20 November 1833 ratified a plan put forth by Javier de Burgos, secretary of state for development (secretario de estado de Fomento),[12] which created the basis for a centralized state[13] divided into 49 provinces. All but four of the provinces received the name of their capital cities;[1] those four—Navarre with its capital at Pamplona, Álava with Vitoria, Gipuzkoa with San Sebastián, and Biscay (Spanish: Vizcaya) with Bilbao[1]—reflected long standing entities, and retained their historic names.[14]

Javier de Burgos's division is practically the same as the short-lived 1822 territorial division of Spain, dating from the "Liberal Trienium" (Trienio Liberal), but without the provinces of Calatayud, Vierzo, and Játiva; also, in contrast to the 1822 division, several provinces were given names other than those of their capitals.[15]

Rather than the merit of having initiated, directed and produced a new provincial division of Spain, Don Javier de Burgos deserves credit for the courage and political will have put in place the previous division of 1822 with the adjustments and modifications that he believed appropriate. 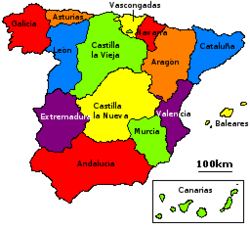 The "historic regions" of Spain, as listed in the 1833 decree.

Javier de Burgos' 1833 provincial division included 49 provinces. The same decree that created the provincial division grouped the provinces into "historic regions". However, these were merely honorary and classificatory: there was no level of administration between the central government and the provinces. These "historic regions" had no powers, no administrative organs, no common jurisdiction over the provinces grouped within them.[17] Each province had a governor (jefe político, "political chief") appointed by the central government.[18]

Besides looking to the 1822 arrangement, Javier de Burgos took as his model the departments of France.[13][19] While many of the borders and inclusions in the provinces may at first appear arbitrary from a historical and geographical point of view, he was operating under a set of rational criteria: area (it was intended to be possible to travel between the capital and any point in the province in a single day), population (wherever feasible, the provinces had populations between 100,000 and 400,000), and geographic coherence.[19]

The provincial division restored the traditional names of the Basque provinces and Navarre,[clarification needed] but few concessions were made to historic enclaves and exclaves. The most important of these that were retained were the Rincón de Ademuz (part of Valencia, but located between Teruel and Cuenca) and the Enclave of Treviño (part of Burgos, but surrounded by Álava); another notable exclave is Llívia (part of Gerona, but one must pass 3 kilometres (1.9 mi) through France to reach it).[2]

The provincial division consolidated rapidly and remains with rather few changes down to the present day.[2][3][20] This is in part because the provincial capitals all became the seats of basic government institutions.[20] The jefes políticos would eventually be replaced by civil governors, and eventually delegates of the central government.[18] The provincial division was followed by all branches of government[20] and formed the basis for all future divisions and combinations.[2][20] Each of Spain's municipalities (ayuntamientos) falls within a single province.[citation needed]

Conflict with the Basque districts

The new design arranged by Jorge de Burgos and government officials in Madrid opened a scenario of overt confrontation with the Basque territories and institutions, who kept a separate legal and institutional status, including taxation and customs with the Spanish heartland on the Ebro river. Navarre was still a semi-autonomous kingdom with its own parliament and government—the Cortes and Diputación—while Álava, Gipuzkoa and Biscay (the Basque Provinces, known also as "Biscay" up to the Peninsular War), were also autonomous. News of the central government's decision overruling native institutions spread to the Basque districts, sparking uproar and anger. The new design thus notably paved the way to the outbreak of the First Carlist War.[22]

While Jorge de Burgos' design of provincial Spain suppressed enclaves, it did keep the ones located in Basque territories—Trucios in Biscay, and Treviño in Álava. According to the new arrangement, the Basque enclaves were to be attached to the closer Spanish province of Common Fiscal Regime. That meant they would be paying taxes to Madrid, not to the relevant Basque government (Álava, Biscay). Oñati was incorporated into Gipuzkoa—definitely in 1845. Despite their close ties of cultural, linguistic, institutional, and legal nature (cf. fueros), it was decided to nominally regroup the above districts into two different "historic regions": Provincias Vascongadas and Navarra.

As remarked above, the 1833 system of provinces has undergone only minimal changes. Jefes políticos were replaced by civil governors, and eventually by delegates and sub-delegates of the central government.[18] There were a few minor adjustments of borders, and several provinces have been renamed to accord with local languages or in view of other issues of regional identity. The "historic regions" went by the wayside during the Spanish transition to democracy in the later 1970s and early 1980s, when they were replaced by the autonomous communities, many of which coincide precisely with an earlier "historic region".[2] Some authors writing about present-day Spain use the term "historic regions" to refer only to the Basque Country, Catalonia, usually Galicia, and occasionally Andalusia, all of which have historically had the strong local nationalisms.[23]

Under Article 141 of the Spanish Constitution of 1978, the provinces remain Spain's basic units of territorial organization. They are the basis for electoral constituencies (Article 68) and autonomous communities are normally formed out of one or more provinces, with no province divided between two or more autonomous communities (Article 143).[39][40] The revised Statute of Autonomy of Catalonia that went into effect in August 2006 ignored the provincial division within Catalonia, replacing it with a division into seven veguerias.[41] However, the number of senators or deputies that Catalonia contributes to Spain's parliament, the Cortes Generales: remained regulated by Article 69 of the Constitution in terms of provinces.[39] While the veguerias project remained controversial, the Catalan government intended to put it into effect in January 2010.[42] However, the 2010 Catalan regional election produced a new legislature which has put these plans on hold.[43]