In 1842, Tahiti and Tahuata were declared a French protectorate, to allow Catholic missionaries to work undisturbed. The capital of Papeetē was founded in 1843. In 1845, George Tupou I united Tonga into a kingdom, and reigned as Tuʻi Kanokupolu.

On August 29, 1842, the first of two Opium Wars ended between China and Britain with the Treaty of Nanking. One of the consequences was the cession of modern-day Hong Kong Island to the British. Hong Kong would eventually be returned to China in 1997.

The First Anglo-Afghan War had started in 1838, started by the British as a means of defending India (under British control at the time) from the Russian Empire's expansion into Central Asia.[2] The British attempted to impose a puppet regime on Afghanistan under Shuja Shah, but the regime was short lived and proved unsustainable without British military support. By 1842, mobs were attacking the British on the streets of Kabul and the British garrison was forced to abandon the city due to constant civilian attacks. During the retreat from Kabul, the British army of approximately 4,500 troops (of which only 690 were European) and 12,000 camp followers was subjected to a series of attacks by Afghan warriors. All Europeans but one were killed; a few Indian soldiers survived also and crossed into India later.[3] The British curbed their ambitions in Afghanistan following this humiliating retreat.

The Sikh Empire was founded in 1799, ruled by Ranjit Singh. When Singh died in 1839, the Sikh Empire began to fall into disorder. There was a succession of short-lived rulers at the central Durbar (court), and increasing tension between the Khalsa (the Sikh Army) and the Durbar. In May 1841, the Dogra dynasty (a vassal of the Sikh Empire) invaded western Tibet,[4] marking the beginning of the Sino-Sikh war. This war ended in a stalemate in September 1842, with the Treaty of Chushul.

The British East India Company began to build up its military strength on the borders of the Punjab. Eventually, the increasing tension goaded the Khalsa to invade British territory, under weak and possibly treacherous leaders. The hard-fought First Anglo-Sikh War (1845-1846) ended in defeat for the Khalsa. With the Treaty of Lahore,[5] the Sikh Empire ceded Kashmir to the East India Company and surrendered the Koh-i-Noor diamond to Queen Victoria.

The Sikh empire was finally dissolved at the end of the Second Anglo-Sikh War in 1849 into separate princely states and the British province of Punjab. Eventually, a Lieutenant Governorship was formed in Lahore as a direct representative of the British Crown.

The decade was near the beginning of the Tanzimât Era of the Ottoman Empire. Sultan Abdülmecid I ruled during this period.

There was a wave of revolutions in Europe, collectively known as the Revolutions of 1848. It remains the most widespread revolutionary wave in European history, but within a year, reactionary forces had regained control, and the revolutions collapsed.

The revolutions were essentially bourgeois-democratic in nature with the aim of removing the old feudal structures and the creation of independent national states. The revolutionary wave began in France in February, and immediately spread to most of Europe and parts of Latin America. Over 50 countries were affected, but with no coordination or cooperation among the revolutionaries in different countries. Six factors were involved: widespread dissatisfaction with political leadership; demands for more participation in government and democracy; demands for freedom of press; the demands of the working classes; the upsurge of nationalism; and finally, the regrouping of the reactionary forces based on the royalty, the aristocracy, the army, and the peasants.[6]

The uprisings were led by ad hoc coalitions of reformers, the middle classes and workers, which did not hold together for long. Tens of thousands of people were killed, and many more forced into exile. The only significant lasting reforms were the abolition of serfdom in Austria and Hungary, the end of absolute monarchy in Denmark, and the definitive end of the Capetian monarchy in France. The revolutions were most important in France, the Netherlands, Germany, Poland, Italy, and the Austrian Empire, but did not reach Russia, Sweden, Great Britain, and most of southern Europe (Spain, Serbia,[7] Greece, Montenegro, Portugal, the Ottoman Empire).[8] 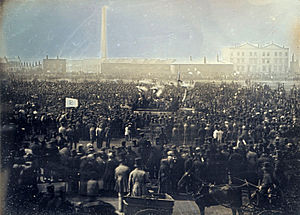 April 10: "Monster Rally" of Chartists held on Kennington Common in London; the first photograph of a crowd depicts it.

The Great Famine of the 1840s caused the deaths of one million Irish people and over a million more emigrated to escape it.[12] It is sometimes referred to, mostly outside Ireland, as the "Irish Potato Famine" because one-third of the population was then solely reliant on this cheap crop for a number of historical reasons.[13][14][15] The proximate cause of famine was a potato disease commonly known as potato blight.[16] A census taken in 1841 revealed a population of slightly over 8 million.[17] A census immediately after the famine in 1851 counted 6,552,385, a drop of almost 1.5 million in 10 years.[18]

The period of the potato blight in Ireland from 1845 to 1851 was full of political confrontation.[19] A more radical Young Ireland group seceded from the Repeal movement and attempted an armed rebellion in the Young Irelander Rebellion of 1848, which was unsuccessful. 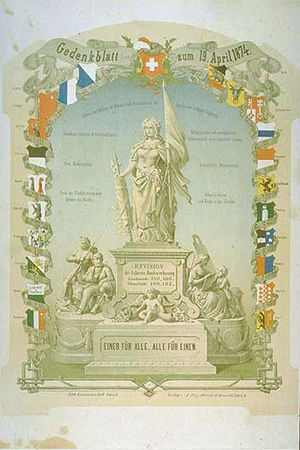 September 12: The Swiss Confederation reconstitutes itself as a federal republic.

File:Belle-poule-napoleon-couleur.jpg
The frigate Belle-Poule brings back the remains of Napoléon to France.

In the prior decade, the desire for responsible government resulted in the abortive Rebellions of 1837. The Durham Report subsequently recommended responsible government and the assimilation of French Canadians into English culture.[22] The Act of Union 1840 merged the Canadas into a united Province of Canada and responsible government was established for all British North American provinces by 1849.[23] The signing of the Oregon Treaty by Britain and the United States in 1846 ended the Oregon boundary dispute, extending the border westward along the 49th parallel. This paved the way for British colonies on Vancouver Island (1849) and in British Columbia (1858).[24] 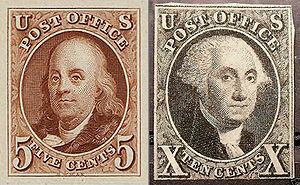 The first U.S. postage stamps have portraits of Benjamin Franklin and George Washington. Though highly collectable, they are far from being the most valuable. 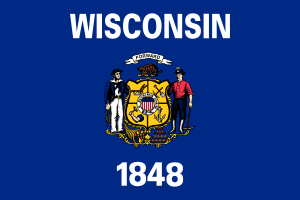 The United States had five different Presidents during the decade. Only the 1880s would have as many. Martin Van Buren was President when the decade began, but was defeated by William Henry Harrison in the U.S. presidential election of 1840. Harrison's service was the shortest in history, starting with his inauguration on March 4, 1841, and ending when he died on April 4, 1841.

Harrison's vice president, John Tyler, replaced him as President (the first Presidential succession in U.S. history), and served out the rest of his term. Tyler spent much of his term in conflict with the Whig party. He ended his term having made an alliance with the Democrats, endorsing James K. Polk and signing the resolution to annex Texas into the United States.

In the Presidential election of 1844, James K. Polk defeated Henry Clay. During his presidency, Polk oversaw the U.S. victory in the Mexican–American War and subsequent annexation of what is now the southwest United States. He also negotiated a split of the Oregon Territory with Great Britain.

November 7: The first US presidential election held in every state on the same day sees Whig Zachary Taylor of Virginia defeat Democrat Lewis Cass of Michigan.

In the U.S. presidential election of 1848, Whig Zachary Taylor of Louisiana defeated Democrat Lewis Cass of Michigan. Taylor's term in office was cut short by his death in 1850. 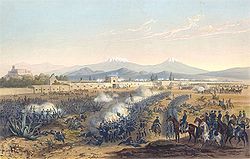 In 1845, the United States of America annexed Texas, which had won independence from Centralist Republic of Mexico in the Texas Revolution of 1836. Nevertheless, Mexico still considered Texas part of its territory, declaring war on the U.S., and starting the Mexican–American War (1846–1848).

Combat operations lasted a year and a half, from the spring of 1846 to the fall of 1847. American forces quickly occupied New Mexico and California, then invaded parts of Northeastern Mexico and Northwest Mexico; meanwhile, the Pacific Squadron conducted a blockade, and took control of several garrisons on the Pacific coast farther south in Baja California Territory. Another American army captured Mexico City, and the war ended in a victory for the United States.

American territorial expansion to the Pacific coast was a major goal of U.S. President James K. Polk.[26] Thus, in the war-ending Treaty of Guadalupe Hidalgo, the U.S. forced Mexican Cession of the territories of Alta California and New Mexico to the United States in exchange for $15 million, In addition, the United States assumed $3.25 million of debt owed by the Mexican government to U.S. citizens. Mexico accepted the loss of Texas and thereafter cited the Rio Grande as its national border. 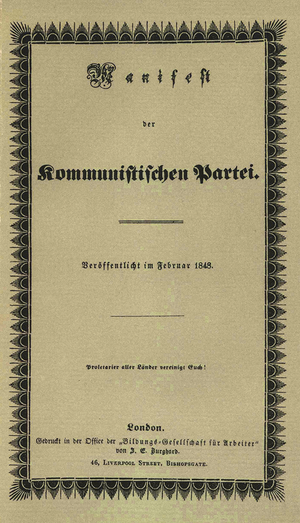 Widespread interest to invest in rail technology led to a speculative frenzy in Britain, known there as Railway Mania. It reached its zenith in 1846, when no fewer than 272 Acts of Parliament were passed, setting up new railway companies, and the proposed routes totalled 9,500 miles (15,300 km) of new railway. Around a third of the railways authorised were never built – the company either collapsed due to poor financial planning, was bought out by a larger competitor before it could build its line, or turned out to be a fraudulent enterprise to channel investors' money into another business. 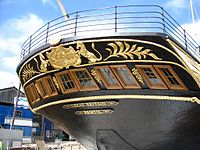 Fashion in European and European-influenced clothing is characterized by a narrow, natural shoulder line following the exaggerated puffed sleeves of the later 1820s fashion and 1830s fashion. The narrower shoulder was accompanied by a lower waistline for both men and women.

The cholera epidemic struck throughout Europe.