The 1856 Democratic National Convention was the seventh political convention of the United States Democratic Party. Held from June 2 to June 6, 1856, prior to the November elections, at Smith & Nixon's Hall in Cincinnati, on the Ohio River in Ohio, it was the first national party nominating convention outside the original thirteen states. The party nominated James Buchanan, U.S. Ambassador to Great Britain, for President (denying re-nomination to incumbent President Franklin Pierce), and former Representative John C. Breckinridge of Kentucky for Vice President.

The Democratic Party faced continued North-South sectional division over slavery-related issues, especially the Kansas–Nebraska Act of 1854 and subsequent violence known as "Bleeding Kansas" from the civil strife in the Kansas Territory during its campaign for statehood. Two notable Democratic politicians, President Pierce and Senator Stephen Douglas of Illinois, were seen as being at the center of the controversies, which led many party members to look elsewhere for a new compromise candidate for president.

Called to order at noon on Monday, June 2, by the National Committee chair Robert McLane, Samuel Medary was made the temporary president. The first day, the convention did little more than appoint committees on credentials, organization, and resolutions (writing a "platform").

On the second day the organization committee (John L. Dawson chair) report was adopted and John Elliot Ward of Georgia was made the convention's president. The committee on credentials (James A. Bayard, Jr. chair) settled a dispute over the Missouri delegation, but needed more time for the thorny problem of competing delegations from New York.

June 4 saw the adoption of a platform (former National Committee chair Benjamin F. Hallett headed the committee on resolutions); the domestic portions were supported unanimously, the foreign policy planks by large margins. A separately reported plank on a railroad to the Pacific coast failed by a vote of 120 to 154.

On June 5, the New York problem was finally settled by seating half of each of the competing delegations. Nominations for President were then made. The four men nominated were all at one time or another nominated by the party for the Chief Executive office: James Buchanan of Pennsylvania (nominated in 1856), President Franklin Pierce of New Hampshire (1852), Senator Stephen A. Douglas, of Illinois (1860), and Senator Lewis Cass of Michigan (1848). On the first ballot, Buchanan led with 135½ votes. Pierce had 122½, Douglas 33, and Cass 5 (4 from the unhappy California delegation). The fourteen ballots taken that day saw Pierce's totals fall, mostly to the benefit of Senator Douglas.

On June 6, Pierce's name was withdrawn, and two more ballots were taken without achieving the two-thirds majority required for a nomination. William A. Richardson, who had nominated Douglas, withdrew the Senator's candidacy and Buchanan was nominated on the 17th ballot. When it came time to choose a vice presidential running-mate, eleven names were placed in nomination; but the convention chose former Representative John C. Breckinridge of Kentucky, even though he had withdrawn his name when nominated. As Vermont's David Allen Smalley stated, "no Democrat has a right to refuse his services when his country calls". Breckinridge was second in total votes on the first ballot; the stampede was on in the second ballot as state after state voted for Breckinridge. 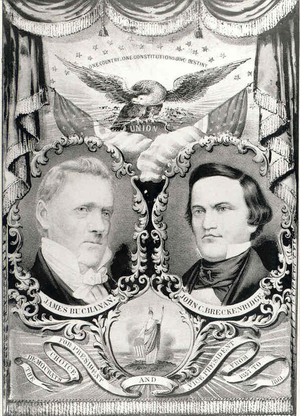 The Democratic Party was wounded from its devastating losses in the 1854–1855 midterm elections. U.S. Senator Stephen A. Douglas of Illinois, who had sponsored the Kansas-Nebraska Act, entered the race in opposition to President Franklin Pierce. The Pennsylvania delegation continued to sponsor its favorite son, James Buchanan.

The 7th Democratic National Convention was held in Smith and Nixon's Hall in Cincinnati, Ohio, on June 2 to 6, 1856. The delegates were deeply divided over slavery. For the first time in American history, a man who had been elected president was denied re-nomination after seeking it. On the first ballot, Buchanan placed first with 135.5 votes to 122.5 for Pierce, 33 for Douglas, and 5 for Lewis Cass. With each succeeding ballot, Douglas gained at Pierce's expense. On the 15th ballot, most of Pierce's delegates shifted to Douglas in an attempt to stop Buchanan, but Douglas withdrew when it became clear Buchanan had the support of the majority of those at the convention, also fearing that his continued participation might lead to divisions within the party that could endanger its chances in the general election.

A host of candidates were nominated for the vice presidency, but a number of them attempted to withdraw themselves from consideration, among them the eventual nominee, John C. Breckinridge of Kentucky. Breckinridge, besides having been selected as an elector, was also supporting Linn Boyd for the nomination. However, following a draft effort led by the delegation from Vermont, Breckinridge was nominated on the second ballot.

The Buchanan-Breckinridge ticket went on to win the 1856 presidential election, defeating John C. Fremont with William L. Dayton from the new Republican Party, and a strong third party showing from the American Party of the "Know Nothings" represented by former President Millard Fillmore and Andrew J. Donelson.