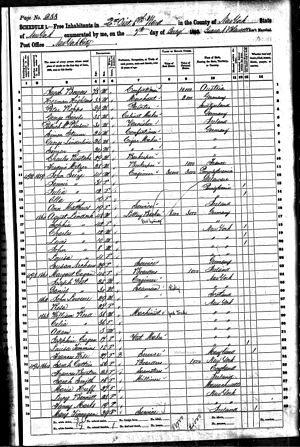 1860 US Census from the state of New York

By the time the 1860 census returns were ready for tabulation, the nation was sinking into the American Civil War. As a result, Census Superintendent Joseph C. G. Kennedy and his staff produced only an abbreviated set of public reports, without graphic or cartographic representations. The statistics did allow the Census staff to produce a cartographic display, including preparing maps of Southern states, for Union field commanders. These maps displayed militarily vital topics, including white population, slave population, predominant agricultural products (by county), and rail and post road transportation routes.

Full documentation for the 1860 population census, including microdata, census forms and enumerator instructions, is available from the Integrated Public Use Microdata Series (IPUMS). Aggregate data for small areas, together with compatible cartographic boundary files, can be downloaded from the National Historical Geographic Information System.

National data reveals that farmers (owners and tenants) made up nearly 10% of utilized occupations. Farm laborers (wage workers) represent the next highest percent with 3.2%, followed by general laborers at 3.0%.[2]

More localized data shows that other occupations were common. In the town of Essex, Massachusetts, a large section of the women in the labor force were devoted to shoe-binding, while for men the common occupations were farming and shoe-making.[3] This heavy demand of shoe-related labor reinforces the high demand for rigorous physical laborers in the economy, as supported by the data of very large amounts of farm related work as compared to most other labor options.

IPUMS' data also notes that the share of the population that had been enrolled in school or marked as "Student" stood at 0.2%. This demonstrates a small rate of growth, if any, in the proficiency of the human capital of the time—the skill set a worker has to apply to the labor force, which can increase total output through increased efficiency.

The census of 1860 was the last in which much of Southern wealth was held as slaves—still legally considered property. Analogous to today where wealth can fluctuate with value changes in stocks, factories, and other forms of property, the South suffered a huge loss of total wealth and assets when the American Civil War ended and slaves were no longer counted as physical property.