The Democratic National Convention was held in New York City between July 4, and July 9, 1868. The front-runner in the early balloting was George H. Pendleton, who led on the first 15 ballots, followed in varying order by incumbent president Andrew Johnson, Winfield Scott Hancock, Sanford Church, Asa Packer, Joel Parker, James E. English, James Rood Doolittle, and Thomas A. Hendricks. The unpopular Johnson, having narrowly survived impeachment, won 65 votes on the first ballot, less than one-third of the total necessary for nomination, and thus lost his bid for election as president in his own right.

I must not be nominated by this Convention, as I could not accept the nomination if tendered. My own inclination prompted me to decline at the outset; my honor compels me to do so now. It is impossible, consistently with my position, to allow my name to be mentioned in this Convention against my protest. The clerk will proceed with the call.[1]

After numerous indecisive ballots, the names of John T. Hoffman, Francis P. Blair, and Stephen Johnson Field were placed in nomination. None of these candidates, however, gained any support.

For twenty-one ballots, the opposing candidates battled it out: the East battling the West for control, the conservatives battling the radicals. The two leading candidates were determined that the other should not receive the nomination; because of the two-thirds rule of the convention, a compromise candidate was needed. Seymour still hoped it would be Chief Justice Salmon P. Chase, but on the twenty-second ballot, the chairman of the Ohio delegation announced, "at the unanimous request and demand of the delegation I place Horatio Seymour in nomination with twenty-one votes-against his inclination, but no longer against his honor."

Seymour had to wait for the rousing cheers to die down before he could address the delegates and decline.

I have no terms in which to tell of my regret that my name has been brought before this convention. God knows that my life and all that I value most in life I would give for the good of my country, which I believe to be identified with that of the Democratic party...

"Take the nomination, then!" cried someone from the floor.

..but when I said that I could not be a candidate, I mean it! I could not receive the nomination without placing not only myself but the Democratic party in a false position. God bless you for your kindness to me, but your candidate I cannot be.[2][3]

Seymour left to platform to cool off and rest. No sooner had he left the hall than the Ohio chairman cried that his delegation would not accept Seymour's declination; Utah's chairman rose to say that Seymour was the man they had to have. While Seymour was waiting in the vestibule, the convention nominated him unanimously. In 1868, the States of Arkansas, Alabama, Florida, North Carolina, South Carolina, Georgia, and Louisiana were readmitted to the Union. Nebraska had been admitted to the Union on March 1, 1867. Texas, Mississippi and Virginia had not yet been readmitted to the Union. 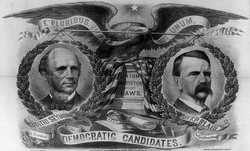 Exhausted, the delegates unanimously nominated General Francis Preston Blair, Jr. for vice-president on the first ballot after John A. McClernand, Augustus C. Dodge, and Thomas Ewing, Jr. withdrew their names from consideration. Blair's nomination reflected a desire to balance the ticket east and west as well as north and south.[4]

Blair had worked hard to acquire the Democratic nomination and accepted second place on the ticket, finding himself in controversy.[5] Blair had gained attention by an inflammatory letter addressed to Colonel James O. Broadhead, dated a few days before the convention met. In his letter, Blair wrote that the "real and only issue in this contest was the overthrow of Reconstruction, as the radical Republicans had forced it in the South."[6]