The 1876 Republican National Convention was a presidential nominating convention held at the Exposition Hall in Cincinnati, Ohio on June 14-16, 1876. President Ulysses S. Grant considered seeking a third term, but with various scandals, a weak economy and Democratic gains in the House of Representatives leading many Republicans to repudiate him, he did not run.[1][2] The convention resulted in the nomination of Governor Rutherford B. Hayes of Ohio for President and Representative William A. Wheeler of New York for Vice President. 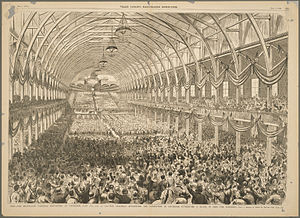 Interior of the Exposition Hall of Cincinnati during the announcement of Rutherford B. Hayes as the party's nominee for president

Blaine led after the first ballot, but had only 285 of the 378 delegates required to secure the nomination. Morton, Bristow, and Conkling each had around 100 delegates, while Hayes and Hartranft each had around 60. The second, third, and fourth ballots saw similar results, but Hayes began to surge on the fifth ballot, passing Morton and Conkling to secure third place after Blaine and Bristow. The sixth ballot saw Blaine rise to 308, but, with the other candidates fading, Hayes continued his surge, moving into second place. After the sixth ballot, the Bristow, Conkling, Morton, and Hartranft supporters withdrew their candidates' names from consideration, leaving Hayes as the sole focus of opposition to Blaine. With the other candidates gone, Hayes won a narrow majority on the seventh ballot and secured the nomination.

The Convention then went on to choose a vice presidential nominee. Congressman William A. Wheeler of New York won a majority on the first ballot, defeating Marshall Jewell, Stewart L. Woodford of New York, Joseph R. Hawley of Connecticut, and Frederick T. Frelinghuysen of New Jersey.

The Republican ticket of Hayes and Wheeler went on to lose the popular vote to Democrats Samuel J. Tilden and Thomas A. Hendricks in the election of 1876, but won the electoral vote after a controversy which was resolved by the Compromise of 1877.