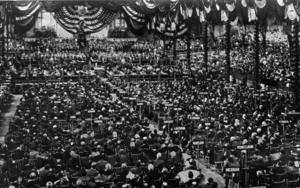 Each state was allotted two delegates per electoral vote, and territories were granted from two to six delegates. Altogether, there were 926 delegates and an equal number of alternates.

Mark Hanna opened the convention. He proposed that Senator Edward O. Wolcott of Colorado serve as temporary chairman. The purpose of Wolcott's selection was to show that the party had overcome its divisiveness of 1896, in which the Colorado delegation walked out of the Republican convention. Senator Henry Cabot Lodge of Massachusetts served as the convention's permanent chairman.

President William McKinley was unanimously nominated for reelection. No candidate ran against him, although Admiral George Dewey considered a run. Governor Theodore Roosevelt of New York, who was himself a delegate, was nominated for Vice President by a vote of 925 to 1 abstention, with his vote alone abstaining.

The 1900 convention had fewer speakers than a modern convention typically has due to lack of TV and even radio at this time. There were however the following speakers:

Balloting: President McKinley is nominated Unanimously! This is the first time something like this has happened since President Grant was in 1872.

Wanting to get rid of him, the nefarious Boss Platt, has convinced NY Governor Theodore Roosevelt, hero of the hour, to allow himself to nominated for Vice President.

Balloting: Governor Roosevelt is the sole delegate to refuse to vote for his nomination for Vice President.

Vice President Garret Hobart had died in 1899, leaving the party the task of choosing a new running mate. Entering the convention, many had expected that the ticket would consist of President McKinley and New York Governor Theodore Roosevelt.[3] However, Ohio Senator Mark Hanna maneuvered to keep Roosevelt off the ballot, instead proposing Navy Secretary John D. Long of Massachusetts or Iowa Congressman Jonathan P. Dolliver.[3] Without the support of McKinley, Hanna's efforts fell short.[4] Roosevelt himself did not particularly want to abandon his position of governor, but he desired to run for president in 1904 and when the party nominated him, he accepted the position.[4] Roosevelt's nomination was spearheaded by bosses Matthew Quay of Pennsylvania and Thomas C. Platt of New York, the latter of whom wished to find a different job for the reformist Roosevelt.[4]

The Republican party supported the current administration's actions in the Philippines, while the Democratic party promoted "anti-imperialism".