The 1903 World Series was the first modern World Series to be played in Major League Baseball. It matched the Boston Americans[1] of the American League against the Pittsburgh Pirates[2] of the National League in a best-of-nine series, with Boston prevailing five games to three, winning the last four.

Pittsburgh pitcher Sam Leever injured his shoulder while trap-shooting, so his teammate Deacon Phillippe pitched five complete games. Phillippe won three of his games, but it was not enough to overcome the club from the new American League. Boston pitchers Bill Dinneen and Cy Young led Boston to victory. In Game 1, Phillippe set a World Series record by striking out ten Boston batters. That record lasted barely one day, as Dinneen struck out eleven Pittsburgh batters in Game 2.

Honus Wagner, bothered by injuries, batted only 6 for 27 (.222) in the Series and committed six errors. The shortstop was deeply distraught by his performance. The following spring, Wagner (who in 1903 led the league in batting average) refused to send his portrait to a "Hall of Fame" for batting champions. "I was too bum last year," he wrote. "I was a joke in that Boston-Pittsburgh Series. What does it profit a man to hammer along and make a few hits when they are not needed only to fall down when it comes to a pinch? I would be ashamed to have my picture up now."[3](p138)

Due to overflow crowds at the Exposition Park games in Allegheny City,[4] if a batted ball rolled under a rope in the outfield that held spectators back, a "ground-rule triple" would be scored. Seventeen ground-rule triples were hit in the four games played at the stadium.[5]

In the series, Boston came back from a three games to one deficit, winning the final four games to capture the title. Such a large comeback would not happen again until the Pirates came back to defeat the Washington Senators in the 1925 World Series, and has happened only ten times in baseball history. (The Pirates themselves repeated this feat in 1979 against the Baltimore Orioles.) Much was made of the influence of Boston's "Royal Rooters", who traveled to Exposition Park and sang their theme song "Tessie" to distract the opposing players (especially Wagner). Boston wound up winning three out of four games in Allegheny City.

Pirates owner Barney Dreyfuss added his share of the gate receipts to the players' share, so the losing team's players actually finished with a larger individual share than the winning team's.

The Series brought the new American League prestige and proved its best could beat the best of the National League, thus strengthening the demand for future World Series competitions.

In 1901, Ban Johnson, president of the Western League, a minor league organization, formed the American League to take advantage of the National League's 1900 contraction from twelve teams to eight. Johnson and fellow owners raided the National League and signed away many star players, including Cy Young and Jimmy Collins. Johnson had a list of 46 National Leaguers he targeted for the American League; by 1902, all but one had made the jump.[3](p99) The constant raiding, however, scotched the idea of a championship between the two leagues. Pirates owner Barney Dreyfuss, whose team ran away with the 1902 National League pennant, was open to a post-season contest and even said he would allow the American League champion to stock its roster with all-stars.[3](p105) However, Johnson had spoken of putting a team in Pittsburgh and even attempted to raid the Pirates' roster in August 1902, which soured Dreyfuss. At the end of the season, however, the Pirates played a group of American League All-Stars in a four-game exhibition series, winning two games to one, with one tie.[3](p102)

The leagues finally called a truce in the winter of 1902–03 and formed the National Commission to preside over organized baseball. The following season, the Boston Americans and Pittsburgh Pirates had secured their respective championship pennants by September. That August, Dreyfuss challenged the American League to an eleven-game championship series. Encouraged by Johnson and National League President Harry Pulliam, Americans owner Henry J. Killilea met with Dreyfuss in Pittsburgh in September and instead agreed to a best-of-nine championship, with the first three games played in Boston, the next four in Allegheny City, and the remaining two (if necessary) in Boston.[3](p122)

One significant point about this agreement was that it was an arrangement primarily between the two clubs rather than a formal arrangement between the leagues. In short, it was a voluntary event, a fact which would result in no Series at all for 1904. The formal establishment of the Series as a compulsory event started in 1905.[citation needed]

The Pirates won their third straight pennant in 1903 thanks to a powerful line-up that included legendary shortstop Honus Wagner, who hit .355 and drove in 101 runs, player-manager Fred Clarke, who hit .351, and Ginger Beaumont, who hit .341 and led the league in hits and runs. The Pirates' pitching was weaker than it had been in previous years but boasted 24-game winner Deacon Phillippe and 25-game winner Sam Leever.[3](pp119, 123)

The 1903 Boston Americans and Pittsburgh Pirates

Although the Pirates had dominated their league for the previous three years, they went into the series riddled with injuries and plagued by bizarre misfortunes. Otto Krueger, the team's only utility player, was beaned on September 19 and never fully played in the series. 16-game winner Ed Doheny left the team three days later, exhibiting signs of paranoia; he was committed to an insane asylum the following month.[3](p122) Leever had been battling an injury to his pitching arm (which he made worse by entering a trapshooting competition). Worst of all, Wagner, who had a sore thumb throughout the season, injured his right leg in September and was never 100 percent for the post-season.[3](pp122–123)

Some sources say Boston were heavy underdogs. Boston bookies actually gave even odds to the teams (and only because Dreyfuss and other "sports" were alleged to have bet on Pittsburgh to bring down the odds).[3](p124) The teams were generally thought to be evenly matched, with the Americans credited with stronger pitching and the Pirates with superior offense and fielding. The outcome, many believed, hinged on Wagner's health. "If Wagner does not play, bet your money at two to one on Boston," said the Sporting News, "but if he does play, place your money at two to one on Pittsburg."[3](quoted in p. 124) 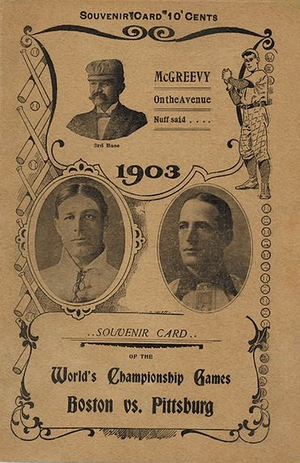 The Pirates started Game 1 strong, scoring six runs in the first four innings. They extended their lead to 7–0 on a solo home run by Jimmy Sebring in the seventh, the first home run in World Series history. Boston tried to mount a comeback in the last three innings, but it was too little too late, and they ended up losing by a score of 7–3 in the first ever World Series game. Both Phillippe and Young threw complete games, with Phillippe striking out ten and Young fanning five, but Young also gave up twice as many hits and allowed three earned runs to Phillippe's two.

After starting out strong in Game 1, the Pirates simply shut down offensively, eking out a mere three hits, all singles. Pittsburgh starter Sam Leever went 1 inning and gave up three hits and two runs, before his ailing arm forced him to leave in favor of Bucky Veil, who finished the game. Bill Dinneen struck out eleven and pitched a complete game for the Americans, while Patsy Dougherty hit home runs in the first and sixth innings for two of the Boston's three runs. The Americans' Patsy Dougherty led off the Boston scoring with an inside-the-park home run, the first time a leadoff batter did just that until Alcides Escobar of the Kansas City Royals duplicated the feat in the 2015 World Series, 112 years later.

Phillippe, pitching after only a single day of rest, started Game 3 for the Pirates and didn't let them down, hurling his second complete game victory of the Series to put Pittsburgh up two games to one. 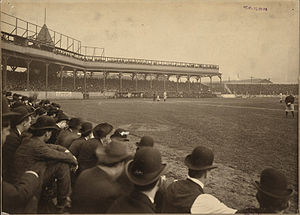 Game 4 of the 1903 World Series at Exposition Park.

After two days of rest, Phillippe was ready to pitch a second straight game. He threw his third complete game victory of the series against Bill Dinneen, who was making his second start of the series. But Phillippe's second straight win was almost not to be, as the Americans, down 5–1 in the top of the ninth, rallied to narrow the deficit to one run. The comeback attempt failed, as Phillippe managed to put an end to it and give the Pirates a commanding 3–1 Series lead.

Game 5 was a pitcher's duel for the first five innings, with Boston's Cy Young and Pittsburg's Brickyard Kennedy giving up no runs. That changed in the top of the sixth, however, when the Americans scored a then-record six runs before being retired. Young, on the other hand, managed to keep his shutout intact before finally giving up a pair of runs in the bottom of the eighth. He went the distance and struck out four for his first World Series win.

Game 6 was a rematch between the starters of Game 2, Boston's Dinneen and Pittsburg's Leever. Leever pitched a complete game this time but so did Dinneen, who outmatched him to earn his second complete game victory of the series. After losing three of the first four games of the World Series, the underdog Americans had tied the series at three games apiece.

The fourth and final game in Allegheny saw Phillippe start his fourth game of the Series for the Pirates. This time, however, he wouldn't fare as well as he did in his first three starts. Cy Young, in his third start of the Series, held the Pirates to three runs and put the Americans ahead for the first time as the Series moved back to Boston.

The final game of this inaugural World Series started out as an intense pitcher's duel, scoreless until the bottom of the fourth when Hobe Ferris hit a two-run single. Phillippe started his fifth and final game of the series and Dinneen his fourth. As he did in Game 2, Dinneen threw a complete game shutout, striking out seven and leading his Americans to victory, while Phillippe pitched respectably but just couldn't match Dinneen because his arm had been worn out with five starts in the eight games, giving up three runs to give the first 20th-century World Championship to the Boston Americans, Honus Wagner striking out to end the Series.