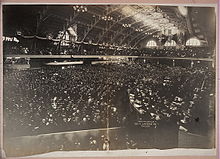 The 1904 National Convention of the Republican Party of the United States was held in the Chicago Coliseum, Chicago, Cook County, Illinois, on June 21 to June 23, 1904.

The popular President Theodore Roosevelt had easily ensured himself of the nomination, though a threat had come from the Old Guard favourite Ohio Senator Mark Hanna, the loyal kingmaker in Republican politics. But the senator had died early in 1904 therefore ending all opposition in the Republican Party.

There were also very informal talks with future president William Howard Taft about trying for the nomination, but Taft refused these motions as evidenced by a letter to Henry Hoyt, the Solicitor General, in 1903.

Roosevelt was nominated by 994 votes to none. The other threat to Roosevelt, Indiana Senator Charles W. Fairbanks was nominated for Vice President.

File:JoeCannon3.jpg
Speaker of the House Joseph Gurney Cannon at the convention.

The 1904 Republican platform favored the protective tariff, increased foreign trade, the gold standard, expansion of the Merchant Marine and strengthening of the United States Navy; it also praised Roosevelt's foreign and domestic policies.

Vice President Roosevelt had ascended to the presidency in 1901 after the death of President William McKinley. As the 25th Amendment had not yet been passed, there was no way to fill the vice presidential vacancy. So the 1904 convention had the task of choosing a new running mate for Roosevelt. Entering the convention, Senator Charles Fairbanks of Indiana was considered the likely favorite for the vice presidential nomination, but the Roosevelt administration favored Illinois Congressman Robert R. Hitt or Secretary of War William Howard Taft of Ohio.[1] Speaker Joseph Gurney Cannon of Illinois also had support among the delegates, but Cannon had no desire to leave his position in the House.[1] However, the administration did not launch a fight over the nomination of Fairbanks, and Fairbanks was nominated by acclamation.[2]

There were significantly fewer speakers at the 1904 convention then there is at a typical convention today. This is because the convention at the time was much lower in viewership (as there were not the mass media devices of TV or radio at this time only those actually invited saw it). Also, this was before the primary era so the delegates were expected to nominate the candidate at the actual convention as well as more typical tasks such as electing the chairman and handling other business which varies in importance at the Republican Convention today. Nonetheless, there were speeches by the following individuals at the 1904 Republican National Convention:

Roosevelt and his running mate Charles Fairbanks, were unanimously nominated but unlike candidates today they did not give convention speeches instead having individuals give nominating speeches for them. Roosevelt's nomination speech was made by former New York Governor Frank S. Black and it was seconded by Indiana Senator Albert Beveridge. Fairbanks's nomination speech was made by Iowa Senator Jonathan P. Dolliver and seconded by New York Senator Chauncey Depew.