The 1908 Messina earthquake (also known as the 1908 Messina and Reggio earthquake[3]) occurred on December 28 in Sicily and Calabria, southern Italy with a moment magnitude of 7.1 and a maximum Mercalli intensity of XI (Extreme). The cities of Messina and Reggio Calabria were almost completely destroyed and between 75,000 and 200,000 lives were lost.

On December 28, 1908, from about 05:20 to 05:21, an earthquake of 7.1 on the moment magnitude scale occurred, centered on the city of Messina, in Sicily. Reggio on the Italian mainland also suffered heavy damage. The ground shook for some 30 to 40 seconds, and the destruction was felt within a 300-kilometer (186-mile) radius. Moments after the earthquake, a 12-meter (39-foot) tsunami struck nearby coasts, causing even more devastation; 91% of structures in Messina were destroyed, and some 70,000 residents were killed.[4] Rescuers searched through the rubble for weeks, and whole families were still being pulled out alive days later, but thousands remained buried there.[5] Buildings in the area had not been constructed for earthquake resistance, having heavy roofs and vulnerable foundations.[6]

The earthquake was caused by normal faulting between plates. Italy sits along the boundary zone of the African Continental plate, and this plate is pushing against the seafloor underneath Europe at a rate of 25 millimeters (1 inch) per year. This causes vertical displacement, which in turn can cause earthquakes.[7] In 2008 it was proposed that the concurrent tsunami was not generated by the earthquake, but rather by a large undersea landslide it triggered. There were also several fires that destroyed houses and turned them to rubble.[8] 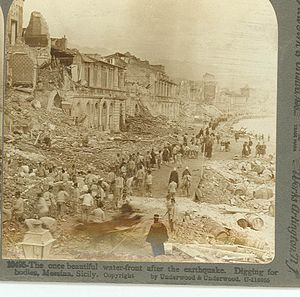 Aftermath of the Messina earthquake and tsunami

News of the disaster was carried by Italian torpedo boats to Nicotera, where the telegraph lines were still working, but that was not accomplished until midnight at the end of the day. Rail lines in the area had been destroyed, often along with the railway stations.[4]

The Italian navy and army responded and began searching, treating the injured, and evacuating refugees (as did every ship). Looters soon had to be shot. King Victor Emmanuel III and the Queen arrived.[4]

The disaster made headlines worldwide and international relief efforts were launched. With the help of the Red Cross and sailors of the Russian and British fleets, search and cleanup were expedited. The Russian battleships Tsesarevich, and Slava and the cruisers Admiral Makarov, and Bogatyr, British battleship Exmouth and the cruisers Euryalus, Minerva, and Sutlej were ordered to provide assistance; the S.S. Afonwen was in Messina harbor during the quake (anchored in 45 fathoms (80 m) of water, but there were only 30 fathoms (55 m) when she sailed full of refugees). The French battleships Justice and Vérité, and three torpedo boat destroyers were ordered to Messina. The U.S. Navy's Great White Fleet and supply ships USS Celtic and USS Culgoa were also ordered to assist. Other nations' ships also responded.[4][9]

In the years following 1908, precautions were taken when reconstruction began, building architecture that would be able to withstand earthquakes of variable magnitude, if one should strike again. In the midst of reconstruction many of the Italian residents were relocated to various parts of Italy. Others were forced to emigrate to America. In 1909 the cargo ship Florida carried 850 such passengers away from Naples. Lost in a dense fog, the Florida collided with the Republic, a luxury passenger liner. Three people aboard the Florida were killed instantly. Within minutes, pandemonium broke out on the ship. The captain of the Florida, Angelo Ruspini, used extreme measures to regain control of the desperate passengers, including firing gunshots into the air. Eventually the survivors were rescued at sea and brought into the New York harbor where they would start a new life.[10]