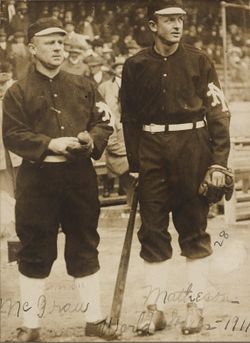 In the 1911 World Series, the Philadelphia Athletics beat the New York Giants four games to two.

Philadelphia third baseman Frank "Home Run" Baker earned his nickname during this Series. His home run in Game 2 off Rube Marquard was the margin of victory for the Athletics, and his blast in Game 3 off Christy Mathewson tied that game in the ninth inning, and the Athletics eventually won in the eleventh. The Giants never recovered. An ironic sidelight was that Mathewson (or his ghostwriter) had criticized Marquard in his newspaper column after Game 2, for giving up the gopher ball, only to fall victim himself the very next day. Baker was swinging a hot bat in general, going 9 for 24 to lead all batters in the Series with a .375 average. According to his New York Times obituary [July 28, 1971], Giants catcher Chief Meyers threw out 12 runners, creating a record for the most assists by a catcher during the World Series.[citation needed]

The six consecutive days of rain between Games 3 and 4 caused the longest delay between World Series games until the earthquake-interrupted 1989 Series (which incidentally featured the same two franchises, albeit on the West Coast). With the sixth and final game being played on October 26, this was also the latest-ending World Series by calendar date until the 1981 Series.

With a perfect top of the first, Christy Mathewson set the record with 28 straight shutout innings in World Series play, a record that would be broken by Boston Red Sox Babe Ruth with 29 2/3 innings in the 1918 World Series. Mathewson's postseason record for consecutive scoreless innings against one team would not be broken until 2013 when Detroit Tiger's Justin Verlander shut out the Athletics (now playing in Oakland) for 30 consecutive innings in the 2012 and 2013 ALDS.

1911 Series: Hot ticket at Shibe Park
240px
The head of the line: early risers at 9 am at the Shibe Park box office at 21st and Lehigh...
240px
...and the tail: the less punctual fans line up down Lehigh, beyond the end of the grandstand

With the score tied at 1 and with Eddie Collins on second, Frank Baker blasted a two run home run off Rube Marquard to deep right field for the go ahead score and the Athletics held on to win game 2, 3–1.

With the Giants up 1–0 going into the ninth with Mathewson on the mound, it appeared the series was going to be 2–1 New York, but with one out, Baker stepped up to the plate and blasted his second home run in as many games to tie the game at 1. Thus the nickname "Home Run" Baker was born. Two innings later with the score still tied at 1, Baker would single and scored on an error to make it 3–1. The Giants would rally for one run in the bottom half but the game ended with a runner being thrown out on a stolen base attempt.

After six days of rain the series resumed. Chief Bender, after getting roughed up for two runs in the first shut out the Giants the rest of the way on his way to a 4–2 win and 3–1 Series lead.

On the verge of elimination, the Giants fought back. They tied it at 3 with two runs in the bottom of the ninth, and then won it with a run in the tenth when Larry Doyle scored on a sacrifice fly. Home plate umpire Bill Klem later said[citation needed] Doyle had failed to touch home plate after sliding in. Since none of the Athletics noticed this and Philadelphia failed to appeal, Klem had to let the winning run stand.