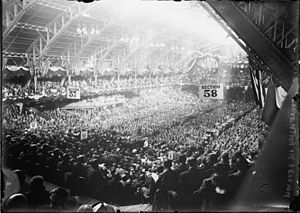 The 1912 Republican National Convention in session

The 1912 National Convention of the Republican Party of the United States was held at the Chicago Coliseum, Chicago, Illinois, from June 18 to June 22, 1912. The party nominated President William Howard Taft and Vice President James S. Sherman for re-election.

Sherman died days before the election, and was replaced as Republican vice-presidential nominee by Nicholas M. Butler of New York.

This convention marked the beginning of a split in the party, resulting from a power struggle between incumbent Taft and former president Theodore Roosevelt. This was the first year for Republican primaries. Though Roosevelt had endorsed Taft as his successor, Taft's perceived drift to the right had alienated Roosevelt, who launched a challenge to Taft's re-nomination. Roosevelt overwhelmingly won the primaries — winning 9 out of 12 states (8 by landslide margins). Taft won only the state of Massachusetts (by a small margin); he even lost his home state of Ohio to Roosevelt. Senator Robert M. La Follette, a reformer, won two states. Through the primaries, Senator LaFollette won a total of 36 delegates; President Taft won 48 delegates; and Roosevelt won 278 delegates. However 36 states did not hold primaries, but instead selected delegates via state conventions.

Entering the convention, the Roosevelt and Taft forces seemed evenly matched, and a compromise candidate seemed possible.[1] The Taft and Roosevelt camps engaged in a fight for the delegations of various states, with Taft emerging victorious, and Roosevelt claiming that several delegations were fraudulently seated.[2] Following the seating of the anti-Roosevelt delegations, California Governor Hiram Johnson proclaimed that progressives would form a new party to nominate Roosevelt.[2] Though many of Roosevelt's delegates remained at the convention, most refused to take part in the presidential ballot in protest of the contested delegates.[3] Roosevelt ultimately ran a third party campaign as part of the Bull Moose Party. Taft and Roosevelt both lost the 1912 election to the Democratic nominee, Woodrow Wilson.

Like Taft, Vice President James S. Sherman of New York was renominated by the party.[4] Though Taft and Sherman did not get along early in their tenure, the two became closer allies as Taft's split with Roosevelt deepened, and Taft did not object to the re-nomination of Sherman.[4] Taft's allies sought progressive leaders such as Idaho Senator William E. Borah and Vermont Governor John A. Mead to join the ticket, but both declined to be considered.[4] Missouri Governor Herbert S. Hadley and former Vice President Charles Fairbanks were also mentioned as possibilities.[4] Sherman died shortly before the election, and was not formally replaced on the ticket.[5] In January, after the election had already been decided, Republican leaders appointed Columbia University president Nicholas Butler to fill out the ticket for the purposes of receiving electoral votes.[5]