The 1918 Pittsburgh Panthers football team represented the University of Pittsburgh in the 1918 college football season. In a season cut short by the Spanish flu pandemic, coach Glenn Scobey "Pop" Warner led the Panthers in a schedule played all in one month, including a convincing victory in a highly publicized game over defending national champion and unscored-upon Georgia Tech. A highly controversial loss ended the season and snapped a 32-game Pitt winning streak, but the Panthers outscored opponents 140–16 in that short season and were retroactively selected as the national champion by the Helms Athletic Foundation and Houlgate System and as a co-national champion with Michigan by the National Championship Foundation.[1] 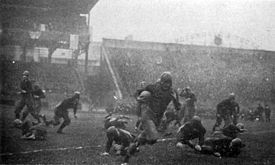 Pitt's Tom Davies runs against undefeated and unscored upon Georgia Tech in the 1918 game at Forbes Field. Pitt won the game 32–0 and is considered by many to be that season's national champion.

The Spanish flu pandemic of 1918 saw the implementation of quarantines that eliminated much of that year's college football season, including five of Pitt's originally scheduled contests. All of Pitt's games that year were played in November, including a high profile game played as a War Charities benefit against undefeated, unscored upon, and defending national champion Georgia Tech, coached by John Heisman. Pitt swept through its first two games and then dismantled Georgia Tech 32–0 in front of many of the nation's top sports writers including Walter Camp. The final game of the season at Cleveland Naval Reserve resulted in "Pop" Warner's first loss at Pitt and is one of the most controversial in school history. Warner, along with some reporters covering the game, insisted Pitt was robbed by the officials who, claiming the official timekeeper's watch was broken, arbitrarily ended the first half before Pitt was able to score and then allowed the Reserves extra time in the fourth quarter to pull ahead 10–9 before calling an end to the game.[2][3] Despite the loss, the 4–1 Panthers of 1918 were named as a national champion for that season by multiple selectors,[4] several of which are considered to be "major" selections by the official NCAA records book.[5]

The 1918 team was selected or recognized as national champions by multiple selectors, several of which are listed as "major" (i.e. national in scope) by the official NCAA football records book.[5] College Football Data Warehouse also recognizes Pitt as a national champion in 1918,[7] as did a 1970 Sports Illustrated study that has served as the historical basis of the university's historical national championship claims since its original publication.[8]

The are the selectors that determined Pitt to be national champions in 1918.[7]

* A "major" selector that was "national scope" according to the official NCAA football records book.[5]