The United Kingdom general election of 1918 was called immediately after the Armistice with Germany which ended World War I, and held on Saturday 14 December 1918. It was the first general election to be held on a single day, although the count did not take place until 28 December due to the time taken to transport votes from soldiers serving overseas.

It resulted in a landslide victory for the coalition government of David Lloyd George, who had replaced H. H. Asquith as prime minister during the war.

The election was also noted for the dramatic result in Ireland, which showed clear disapproval towards government policy. The Irish Parliamentary Party were almost completely wiped out by the hardline Sinn Féin republicans, who refused to take their seats in Westminster. It was the last election before the majority of Irish counties seceded from the UK to form the Irish Free State; the Irish War of Independence began soon after the election.

On 14 November it was announced that Parliament, which had been sitting since 1910 and had been extended by emergency wartime action, would dissolve on 25 November, with elections on 14 December.[1]

Following confidential negotiations over the summer of 1918, it was agreed that certain candidates were to be offered the support of the prime minister and the leader of the Conservative Party at the next general election. To these candidates a letter, known as the Coalition Coupon, was sent, indicating the government's endorsement of their candidacy. 159 Liberal, 364 Conservative, 20 National Democratic and Labour, and 2 Coalition Labour candidates received the coupon. For this reason the election was sometimes known as the coupon election.

The Labour Party, led by William Adamson, fought the election independently, as did those Liberals who did not receive a coupon.

The election was not chiefly fought over what peace to make with Germany, although those issues played a role. More important was the voters' evaluation of Lloyd George in terms of what he had accomplished so far and what he promised for the future. His supporters emphasized that he had won the Great War. Against his strong record in social legislation, he called for making "a country fit for heroes to live in."[3]

This election was known as a khaki election, due to the immediate postwar setting and the role of the demobilized soldiers.

The coalition won the election easily, with the Conservatives the big winners. They were the largest party in the governing majority. Lloyd George remained Prime Minister, despite the Conservatives outnumbering his pro-coalition Liberals.

An additional 47 Conservatives, 23 of whom were Irish Unionists, won without the coupon but did not act as a separate block or oppose the government except on the issue of Irish independence.

While most of the pro-coalition Liberals were re-elected, Asquith's faction was reduced to just 36 seats and lost all their leaders from parliament; Asquith himself lost his own seat. Nine of these MPs subsequently joined the Coalition Liberal group.

The Labour Party greatly increased its vote share, surpassing the total votes of either Liberal party. However, they only slightly increased their number of seats, and lost some of their earlier leaders like Ramsay MacDonald and Arthur Henderson. Labour won the most seats in Wales (which had previously been dominated by the Liberals) for the first time, a feat it has continued to the present day.

The Conservative MPs included record numbers of corporate directors, bankers and businessmen, while Labour MPs were mostly from the working class. Many young veterans reacted against the harsh tone of the campaign and became disillusioned with politics.[4]

In Ireland, the Irish Parliamentary Party lost almost all their seats, most of which were won by Sinn Féin under Éamon de Valera. The 73 Sinn Féin elected members declined to take their seat in the British House of Commons, sitting instead in the Irish revolutionary assembly, Dáil Éireann. On 17 May 1918 almost the entire leadership of Sinn Féin, including de Valera and Arthur Griffith, had been arrested. In total 47 of the Sinn Féin MPs were elected from jail. The Dáil first convened on 21 January 1919, which marks the beginning of the Irish War of Independence.

Constance Markievicz became the first woman elected to Parliament. She was a Sinn Féin member elected for Dublin St Patrick's, and like the other Sinn Féin MPs, she did not take her seat. 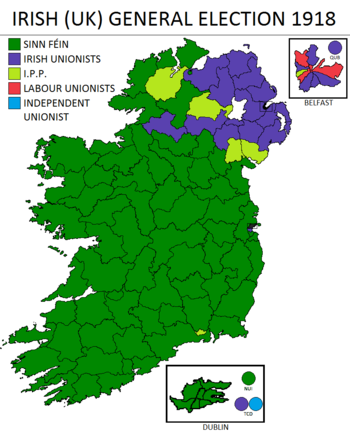 Results in Ireland. The Sinn Féin MPs did not take their seats in the House of Commons, and instead formed Dáil Éireann.
File:Greater-London-1918-election.PNG
Results in London 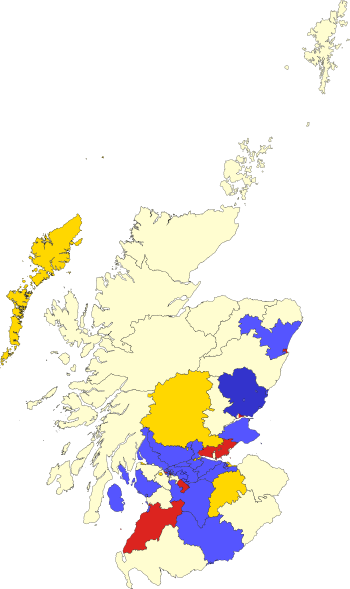