The 1920 Democratic National Convention was held at the Civic Auditorium in San Francisco, California from June 28 to July 6, 1920. It resulted in the nomination of Governor James M. Cox of Ohio for President and Assistant Secretary of the Navy Franklin D. Roosevelt from New York for Vice President.

Neither President Woodrow Wilson, in spite of his failing health, nor former Secretary of State and three-time presidential candidate William Jennings Bryan had entirely given up hope that their party would turn to them, but neither was, in the event, formally nominated. In addition to the eventual nominee, Cox, the other high-scoring candidates as the voting proceeded were: Secretary of the Treasury William McAdoo and Attorney General Mitchell Palmer. On the forty-fourth ballot, Governor James M. Cox of Ohio was nominated for the Presidency.[1]

The platform adopted by the convention supported the League of Nations, albeit with qualifications, and women's suffrage. 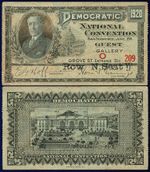 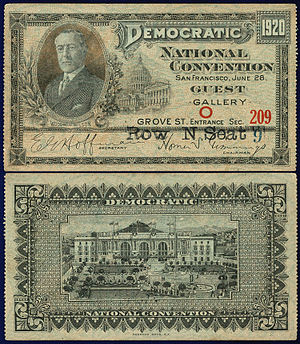 A guest ticket purchased for the Democratic National Convention in San Francisco.

Although William Gibbs McAdoo (Wilson's son-in-law and former Treasury Secretary) was the strongest candidate, Wilson blocked his nomination in hopes a deadlocked convention would demand that he run for a third term, even though he was seriously ill, physically immobile, and in seclusion at the time. The Democrats, meeting in San Francisco between June 28 and July 6 (the first time a major party held its nominating convention in an urban center on the Pacific coast), nominated another newspaper editor from Ohio, Governor James M. Cox, as their presidential candidate, and 38-year-old Assistant Secretary of the Navy Franklin D. Roosevelt, a fifth cousin of the late president Theodore Roosevelt, for vice-president.

It seemed that this was going to be a free for all too, but Cox had asked the delegates to support former Assistant Navy Secretary Franklin D. Roosevelt, because, as some thought, he had a "magic name." FDR was nominated by voice vote and received the nomination by acclamation.[2] After it became clear that Roosevelt was the choice of party leaders, former Ambassador David R. Francis of Missouri, Major General Lawrence Tyson of Tennessee, Governor Sam V. Stewart of Montana, former Governor James H. Hawley of Idaho, former FTC Chairman Joseph Davies of Wisconsin, T.T. Vaughan of Oregon, and oil tycoon Edward L. Doheny of California all withdrew their candidacies.[3]