The 1924 Summer Olympics (French: Les Jeux olympiques d'été de 1924), officially known as the Games of the VIII Olympiad, were an international multi-sport event which was celebrated in 1924 in Paris, France. It was the second time Paris hosted the games, after 1900. The selection process for the 1924 Summer Olympics consisted of six bids, and saw Paris be selected ahead of Amsterdam, Barcelona, Los Angeles, Prague and Rome. The selection was made at the 20th IOC Session in Lausanne in 1921.[1] 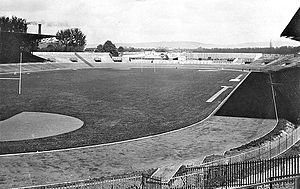 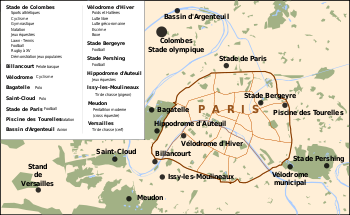 Overall map of the Olympic venues

126 events in 23 disciplines, comprising 17 sports, were part of the Olympic program in 1924. The number of events in each discipline is noted in parentheses.

Participating Countries of the 1924 Olympiad

A total of 44 nations were represented at the 1924 Games. Germany was still absent, having not been invited by the Organizing Committee.[6] China (although did not compete), Ecuador, Haiti, Ireland, Lithuania, the Philippines, and Uruguay attended the Olympic Games for the first time. Latvia and Poland attended the Summer Olympic Games for the first time (having both appeared earlier at the 1924 Winter Olympics in Chamonix).

These are the top ten nations that won medals the 1924 Games.

The last surviving competitor of the 1924 Summer Olympics was Croatian swimmer Ivo Pavelić, who died on 22 February 2011 at the age of 103.