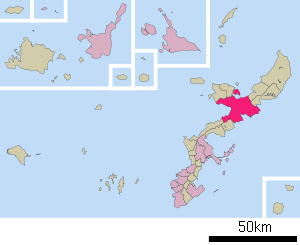 Location of Katsuyama near Nago, Okinawa

The Katsuyama killing incident in 1945, was a killing of three African American Marines by Okinawans from the Katsuyama village near Nago, Okinawa after the Battle of Okinawa, shortly before the end of the war in the Pacific. Many years later some of the villagers confessed that every weekend three black United States Marines had allegedly been visiting the village around that time and every time they violently took the village women into the hills with them and raped them. When the Marines started to confidently carry out their weekly ritual unarmed, the villagers reportedly overwhelmed the men one time and killed all three. Their bodies were hidden in the nearby cave out of fear for retaliation against the village, a village secret until 1997.[1] Since the killings, the cave has been known as Kurombo Gama, which roughly translates to Black Men's cave in English.[2]

Villagers revealed long after the attack that the Marines were so confident that the villagers were powerless that they came to the village without weapons.[3] Taking advantage of this, the villagers ambushed the African Americans with the help of two armed Japanese soldiers who were hiding in the nearby jungle.[3] Shinsei Higa, who was sixteen at the time, remembers that "I didn't see the actual killing because I was hiding in the mountains above, but I heard five or six gunshots and then a lot of footsteps and commotion. By late afternoon, we came down from the mountains and then everyone knew what had happened."[1]

To cover up the African American deaths, the bodies were dumped in a local cave that had a 50-foot (15 m) drop off close to its entrance.

When the men did not return to their Marine Corps posts, they were listed as possible deserters in the summer of 1945. After a year with still no evidence of what happened to them, they were declared missing in action.[1]

Kijun Kishimoto was almost thirty during the incident and grew up in Katsuyama. He was away from the village when the men were killed. In an interview, he said, "People were very afraid that if the Americans found out what happened there would be retaliation, so they decided to keep it a secret to protect those involved."[1]

Finally, a guilty conscience led Kishimoto to contact Setsuko Inafuku (稲福節子?), a tour guide for Kadena United States Air Base in Okinawa, whose deceased son Clive was also a victim of sexual assault, and who was involved in the search for deceased servicemen from the war.[1] The two searched for the cave in June 1997, but could not find it until that summer, when a storm blew down a tree which had been blocking the entrance .[1] The local Japanese police were informed but they kept it secret for a few months to protect the people who discovered the location of the bodies.

When they finally told Marine officials, the USMC located the bodies at the bottom of the mine shaft. Using dental records all men were identified as the 19-year-old Marines who went missing in 1945. Their names were Pfc. James D. Robinson of Savannah, Ga., Pfc. John M. Smith of Cincinnati, and Pvt. Isaac Stokes of Chicago.[1]

No plans were made to criminally investigate the incident by either the United States military or the Okinawa police.[1]

After the Battle of Okinawa, the island chain was occupied under the United States Civil Administration of the Ryukyu Islands until 1972. At that time, the U.S. government returned the islands to Japanese administration. Under the Treaty of Mutual Cooperation and Security, the United States Forces Japan (USFJ) have maintained a large military presence: 27,000 personnel, including 15,000 Marines, contingents from the Navy, Army, and Air Force, and their 22,000 family members are stationed in Okinawa.[4]