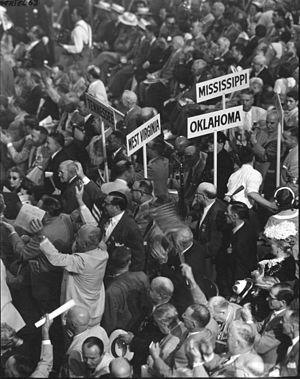 Attendees at the 1952 convention

The 1952 Republican National Convention was held at the International Amphitheatre in Chicago, Cook County, Illinois from July 7 to July 11, 1952, and nominated the popular general and war hero Dwight D. Eisenhower of New York, nicknamed "Ike," for president and the anti-communist crusading Senator from California, Richard M. Nixon, for vice president.

The Republican platform pledged to end the unpopular war in Korea, to fire all "the loafers, incompetents and unnecessary employees" at the State Department, condemned the Roosevelt and Truman administrations' economic policies, supported retention of the Taft-Hartley Act, opposed "discrimination against race, religion or national origin", supported "Federal action toward the elimination of lynching", and pledged to bring an end to communist subversion in the United States.[1]

Candidates before the convention 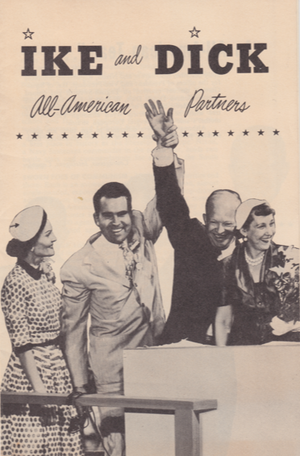 A piece of literature for the Eisenhower–Nixon campaign, 1952

Eisenhower was so unfamiliar with politics that even after his nomination he believed that the delegates would choose the vice-presidential nominee, surprising his advisors Lucius D. Clay and Herbert Brownell. When they explained that the delegates would support whoever he chose, Eisenhower suggested businessmen he knew such as Charles E. Wilson and C. R. Smith. Clay and Brownell explained that a running mate should be a politician who balanced the ticket in geography, age, and other areas, and suggested Richard Nixon, who had helped Eisenhower win California's delegates. Eisenhower had met Nixon, and accepted the suggestion. Nixon was nominated unanimously.[2]