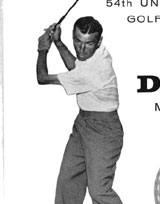 The 1954 U.S. Open was the 54th U.S. Open, held June 17–19 at Baltusrol Golf Club in Springfield, New Jersey. Ed Furgol won his only major title, one stroke ahead of runner-up Gene Littler.[1]

Littler owned the 36-hole lead by two strokes over defending champion Ben Hogan and Furgol. After a 76 in the third round, Littler fell three strokes back of Furgol, who shot a 71 to take a one-stroke lead over Dick Mayer. Hogan made four bogeys at the first six holes and fell out of contention with a 76. In the final round, Littler rebounded with a 70, but it was not enough. Furgol was helped by a great recovery on the 18th. After hitting his drive into the trees, he played his escape shot onto the 18th fairway of Baltusrol's other course. From there he managed to make par, carding a 72 for a 284 total. Mayer was tied with Furgol as he played 18, but he double-bogeyed the hole to fall into third.[3][4]

This U.S. Open was the first to be nationally televised. It was also the first in which ropes were used to control the gallery. Prize money was increased by 20% over the previous year.[2]