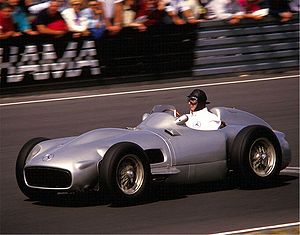 Juan Manuel Fangio in a Mercedes Benz W196, pictured at the Nurburgring in 1986. This was the car he used to win his 3rd Drivers' Championship

The 1955 Formula One season was the sixth season of FIA Formula One motor racing. It featured the 1955 World Championship of Drivers,[1] which commenced on 16 January 1955 and ended on September 11 after seven races. Juan Manuel Fangio won his second consecutive World Championship title in a season that was curtailed by tragedies.

The season also included a number of non-championship Formula One races.

Mercedes drivers again dominated the championship, with Fangio taking four races, and his new team mate Stirling Moss the British Grand Prix. Ferrari won at Monaco after all of the Mercedes cars broke down and Lancia driver Alberto Ascari crashed into the harbour. Although Ascari was apparently unscathed, the double World Champion crashed fatally at Monza while testing sportscars four days later.

The disaster at the 24 Hours of Le Mans on 11 June which killed Pierre Levegh and over 80 spectators led to the cancellations of the French, German, Spanish and Swiss Grands Prix.[2] The French round, which was supposed to be held at Reims between the Dutch and British rounds, was cancelled first. Then the German event at the Nürburgring, the Swiss round at Bremgarten and the Spanish round at Pedralbes followed suit. Pedralbes and Bremgarten were then abandoned and never used again for racing; motor racing was banned altogether in Switzerland and since then, the ban remains. These cancellations effectively handed the Drivers' title to Fangio after he finished 2nd to Moss at the British Grand Prix; although he wasn't actually crowned champion until well after the British Grand Prix, because the German, Swiss and Spanish rounds were cancelled after the British Grand Prix took place.

Aside from Ascari's death this year, Italian Mario Alborghetti died at the non-championship Pau Grand Prix in France driving a Maserati; and during the Indianapolis 500, two drivers were killed during the month-long event: Americans Manny Ayulo in practice and previous race winner Bill Vukovich during the race 2 weeks later.

The following teams and drivers competed in the 1955 FIA World Championship.

Other Formula One races also held in 1955, which did not count towards the World Championship.