The 1955 Le Mans disaster occurred during the 1955 24 Hours of Le Mans motor race, when a crash caused large fragments of racing car debris to fly into the crowd. Eighty-three spectators and driver Pierre Levegh died and 120 more were injured in the most catastrophic accident in motorsport history.

There was much debate over the apportioning of blame. To reach his pit-stop, Mike Hawthorn had to cut in front of Lance Macklin, causing Macklin to swerve into the path of Levegh in his much faster Mercedes. The collision propelled Levegh’s car upwards and into a concrete stairwell, where he was killed, and the wreck exploded in flames. However the inquiry held none of the drivers responsible, and blamed the layout of the 30-year old track, which had not been designed for cars of this speed.

Pierre Levegh, aged 49, had been hired by Mercedes-Benz as a factory driver that year. Part of his appeal to Mercedes was his determination shown in the 1952 race when he had driven for 23 straight hours, even though the team had a driver who could have replaced him. He failed to win only because of a missed gear change, due to exhaustion, with just 45 minutes remaining, resulting in a failed connecting rod in his Talbot-Lago.

Mercedes-Benz had debuted its new 300 SLR sportscar in the 1955 World Sportscar Championship season, with some notable success, including a win at the Mille Miglia. The 300 SLR featured a body made of an ultralightweight magnesium alloy called Elektron with a specific gravity of 1.8 (in comparison, aluminium has a S.G. of 2.7 and steel 7.8). This new material reduced the weight of the car and thus improved its performance. However, the car lacked the more efficient state-of-the-art disc brakes featured on the rival Jaguar D-Type, employing instead the traditional drum brake system. The high power of the car forced Mercedes' engineers to incorporate a large air brake behind the driver that could be raised to increase drag and slow the car with sufficient rapidity for most conditions.

Safety measures commonly in place today were relatively unknown in 1955. Aside from two layout changes to make the circuit shorter, the Le Mans circuit itself had remained largely unaltered since the inception of the race in 1923, when top speeds of cars were typically in the region of 100 km/h (60 mph). By 1955 top speeds were in excess of 300 kilometres per hour (190 mph).[1] The cars had no seatbelts, the drivers reasoning that it was preferable to be thrown clear in a collision rather than be either crushed beneath an overturned car or trapped in a burning car.[2]

The 1955 24 Hours of Le Mans began on 11 June 1955, with Pierre Levegh behind the wheel of the #20 Mercedes-Benz 300 SLR run by Daimler-Benz. American John Fitch was Levegh's assigned partner in the car, and he would take over driving duties later. Competition between Mercedes, Jaguar, Porsche, Ferrari, Aston Martin and Maserati was close, with all the marques fighting for the top positions early on. The race was extremely fast, with lap records being repeatedly broken.[2]

Towards the end of Lap 35, Levegh was following Mike Hawthorn's leading Jaguar D-type. Approaching the pit straight, Hawthorn passed Lance Macklin's slower Austin Healey 100S. Seeing the Jaguar crew signaling him for his first pit stop, Hawthorn moved across Macklin's path and slowed suddenly to enter the pits.[3][4][5][6] Attempting to avoid Hawthorn, Macklin's car briefly remained on the right side of the track behind Hawthorn, kicking up dust with its right wheels, then swerved across the center of the track. Macklin was apparently out of control as he started to swerve, but regained direction after crossing the centerline. But by then Macklin was in the path of Levegh, still at speed (about 240 km/h (150 mph)) in front of Fangio. Levegh did not have time to react. Levegh's car made contact with the left rear of Macklin's car as he closed rapidly upon the slowed car.[2]

When Levegh's 300 SLR hit Macklin's Austin-Healey from behind, his car became airborne, soaring towards the left side of the track. It skipped the earthen embankment separating the spectator area from the track, bounced through spectator enclosures, then hit a concrete stairwell structure head-on. That impact disintegrated the front end of the car, which then somersaulted high, pitching debris into the spectator area, and landed atop the earthen embankment. The debris included the bonnet, motor, and front axle, which separated from the frame and flew through the crowd.

The bonnet decapitated tightly jammed spectators like a guillotine.[7] With the front of the spaceframe chassis—and thus crucial engine mounts—destroyed, the car's heavy engine block also broke free and hurtled into the crowd. Spectators who had climbed onto ladders and scaffolding to get a better view of the track found themselves in the direct path of the lethal debris.[2] Levegh was thrown free of the tumbling car, but his skull was fatally crushed on landing.

When the rear section of the car landed on the embankment, the fuel tank exploded. The ensuing fuel fire raised the temperature of the remaining Elektron bodywork past its ignition temperature, which was lower than other metal alloys due to its high magnesium content. The alloy burst into white-hot flames, sending searing embers onto the track and into the crowd. Rescue workers, totally unfamiliar with magnesium fires, poured water on the inferno, greatly intensifying the fire. As a result, the car burned for several hours. Official accounts put the death total at 84 (83 spectators plus Levegh), either by flying debris or from the fire, with a further 120 injured. Other observers estimated the toll to be much higher.[2] Whatever the total, it was the most catastrophic accident in motorsport history.

Fangio, driving behind Levegh, narrowly escaped the heavily damaged Austin-Healey, which was now skidding to the right of the track, across his path. Macklin then hit the pit wall, striking three people and killing one, and bounced back to the left, crossing the track again and striking the barrier. Macklin survived the incident without serious injury.[2]

Conclusion of the race 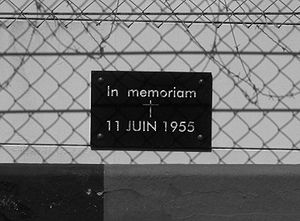 The race was continued, officially in order to prevent departing spectators from crowding the roads and slowing down ambulances. An emergency meeting of the Daimler-Benz board of directors was convened by midnight at the request of Levegh's co-driver, John Fitch.[8] Mindful of sensitivities involving German cars in a French race just 10 years after the end of World War II, the board decided to pull out from the race as a sign of respect to the victims. Eight hours after the accident, while leading the race (and two laps ahead of the Jaguar team), the Mercedes team withdrew the cars of Juan Manuel Fangio/Stirling Moss and Karl Kling/André Simon.[9] Mercedes invited Jaguar to also retire, but they declined.[2]

Funeral services were held the next day at the cathedral in the town of Le Mans.

The French press carried photographs of Hawthorn and Bueb celebrating their win with the customary champagne and treated them with scorn.[2]

The rest of the 1955 World Sportscar Championship season was completed, with two more races at the British RAC Tourist Trophy and the Italian Targa Florio, although they were not run until September and October, several months after the accident. Mercedes-Benz won both of these events, and were able to secure the constructors championship for the season.

After winning the Targa Florio, the last major race of the 1955 season, Mercedes-Benz announced that they would no longer participate in factory sponsored motor-sport in order to concentrate on development of production cars. The self-imposed ban on circuit racing lasted until the 1980s. Several drivers, including Fangio and Jaguar's Norman Dewis, never raced at Le Mans again.[2]

Opinions differed widely amongst the other drivers as to who was directly to blame for the accident, and such differences remain even today. Macklin claimed that Hawthorn's move to the pits was sudden, causing an emergency that led him to swerve into Levegh's path. Years later Fitch claimed, based on "what I saw and what I heard" that Hawthorn caused the accident. Dewis ventured the opinions that Macklin's move around Hawthorn was careless and that Levegh was not competent to meet the demands of driving at the speeds the 300SLR was capable of.[2] Macklin, on reading Hawthorn's autobiography Challenge Me The Race in 1958, was embittered to find that Hawthorn disclaimed all responsibility for the accident without identifying who had actually caused it. With Levegh dead, Macklin presumed that Hawthorn's implication was that he (Macklin) had been responsible, and he began a libel action. The action was unresolved when Hawthorn was killed in a crash on the Guildford bypass in 1959.[10]

The official inquiry into the accident ruled that Hawthorn was not responsible for the crash, and that it was merely a racing incident. The death of the spectators was blamed on inadequate safety standards for track design. The Grandstand and pit areas were demolished and rebuilt soon after.[2]

The death toll led to a ban on motorsports in France, Spain, Switzerland, Germany and other nations, until the tracks could be brought to a higher safety standard. In the United States, the American Automobile Association (AAA) dissolved their Contest Board that had been the primary sanctioning body for autosport in the US (including the Indianapolis 500) since 1904. Switzerland's ban did not allow for the running of timed motorsports such as hillclimbs. This forced Swiss racing promoters to organize circuit events in foreign countries including France, Italy and Germany. In 2003 the Swiss parliament started a lengthy discussion about whether this ban should be lifted. The discussion focused on traffic policy and environmental questions rather than on safety. On 10 June 2009, the Ständerat (one chamber of the parliament) defeated the proposal to lift the ban for the second time and thus definitively,[11] which meant that the ban would stay.[12]