The 1957 Formula One season was the eighth season of FIA Formula One motor racing. It featured the 1957 World Championship of Drivers[1] which commenced on 13 January 1957 and ended on 8 September after eight races. Juan Manuel Fangio won his fourth consecutive title, his fifth in total, in his final Championship – a remarkable feat that would not be matched for nearly 50 years. The season also included numerous non-championship races for Formula One cars.

Fangio chose to switch teams again, joining Maserati before the start of the season. The decision to switch proved to be a masterstroke, with Ferrari's line-up of Peter Collins, Eugenio Castellotti and the returning Mike Hawthorn failing to win a race. Castellotti and Alfonso de Portago were killed during the season (neither in Formula One crashes), making this a truly disastrous year for Ferrari.

The man Fangio replaced at Maserati, Stirling Moss, moved to Vanwall, a team beginning to fulfill their promise. Between them Fangio and Moss won every Grand Prix of the season, Fangio taking four victories to Moss' three. Fangio's drive at the Nürburgring, where he overtook Collins and Hawthorn on the penultimate lap after a pit stop had put him nearly a minute behind, was a classic.

At the end of the year it was announced Fangio would not return for another season. Maserati also pulled out, citing financial reasons. This was also the final year in which points were awarded for shared drives.

The 1957 World Championship of Drivers comprised the following eight races.

All Grand Prix events were open to Formula One cars but the Indianapolis 500 was restricted to USAC National Championship cars. The ongoing Suez crisis, which affected oil tankers delivering oil to their respective countries, affected a number of countries such as the Netherlands, Belgium, and Spain. These countries were to each have Grands Prix but they were all cancelled because of the very high oil prices in those countries.[2] 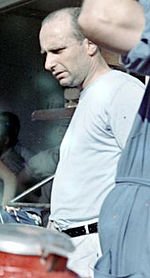 The following teams and drivers competed in the 1957 World Championship of Drivers. The list does not include those who only contested the Indianapolis 500.

Championship points were awarded on an 8–6–4–3–2 basis for the first five placings in each race. An additional point was awarded for the fastest race lap.

The following Formula One races, also held in 1957, did not count towards the World Championship of Drivers.