The 1961 Major League Baseball expansion was the formation of two new Major League Baseball (MLB) franchises that started in time for the 1961 season. The Los Angeles Angels and the Washington Senators were added to the American League (AL), becoming the 17th and 18th teams in MLB's two leagues. The expansion franchise in Los Angeles became the second MLB team in the city, after the Dodgers moved there from Brooklyn in 1958. The Senators replaced a previous franchise of the same name that moved to Minneapolis–St. Paul in 1961 and became the Minnesota Twins.

The expansion was part of an initiative that resulted in the addition of four clubs to MLB, in response to the threat of a proposed third major league, the Continental League. The following year the National League also added two new teams, the Houston Colt .45s (later named the Astros) and the New York Mets.

For a 50-year period from 1903 to 1952, MLB's 16-team (split into the American and National Leagues (NL)) structure remained intact. No franchises were relocated during this period, and five markets—Boston, Chicago, New York City, Philadelphia, and St. Louis—had two or more teams. According to authors Andy McCue and Eric Thompson, "The less financially successful clubs in two-team cities were finding it increasingly difficult to compete" by the early 1950s.[1] In addition, population changes in the United States were leading to many citizens moving away from the Northeast, where many MLB teams were based, to southern and western locations.[1]

From 1953 to 1955, three franchises were relocated, all of which had been in markets with two or more teams. Prior to the 1958 season, the two New York City teams in the NL—the Brooklyn Dodgers and New York Giants, moved westward; the Dodgers relocated to Los Angeles, while San Francisco became the new home of the Giants.[1] New York City sought a replacement NL franchise, and by December 1958 MLB had created an Expansion Committee.[1] Despite the formation of the group, MLB displayed little intention of adding a New York team.[2]

The relocation of the Dodgers and Giants led to a proposal for a third major league: the Continental League, which would have started by 1961 with franchises in markets MLB had previously ignored. In addition, MLB was facing pressure from the U.S. Congress, which indicated that efforts to prevent future expansion would arouse interest in weakening the sport's exemption from antitrust laws.[3] Congress voted on a bill aimed at repealing the exemption, but it failed to pass. However, MLB moved to expand after a rival league became a possibility.[2] The threat posed by the Continental League ended in August 1960, when the NL proposed expanding to include four of the new organization's clubs. The AL then became interested in the idea of expansion. Expansion Committee chairman Del Webb initially backed the addition of a Houston-based franchise, but the NL spoiled the idea when it announced the addition of teams in that city and New York for 1962.[1]

For many years, Los Angeles had been rumored to be a potential site for an AL franchise. At the time of the expansion, the Los Angeles area was the second-most populated in the U.S., and several sports teams had already moved into the city, including the NL's Dodgers. Actor Gene Autry led a group that paid $2.1 million for the right to place an MLB team in Los Angeles.[4] Autry, who owned radio stations, had been seeking to acquire a contract to broadcast baseball games when he traveled to MLB's Winter Meetings. After the Meetings, on December 6, 1960, his group received franchise rights. The Los Angeles team was initially scheduled to begin play in 1962, but a relocation plan elsewhere in the AL resulted in the start date being changed to 1961.[5]

The second new AL team brought the league's return to Washington, D.C. The city had been the location of the Washington Senators starting in 1901, but after winning the 1924 World Series the club had slipped towards the bottom of the AL standings in most seasons after 1940. Senators owner Calvin Griffith, believing that the team could not prosper in the capital city, sought to relocate to Minneapolis, Minnesota. In response, in October 1960 MLB permitted the Senators to move in time for the upcoming season, and gave Washington, D.C. an expansion team to replace the departing Senators.[6] The decision was partially in response to pressure from Congress, which had wanted a replacement for the former Senators. As with the Angels' ownership group, the new Senators' owners paid a $2.1 million fee for the right to an MLB franchise.[7] 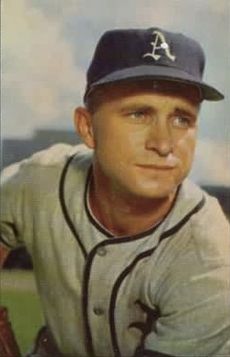 A draft was held on December 14, 1960, to stock the new teams with players from the existing AL clubs. All teams were required to make seven players draftable from their regular rosters, along with eight more from their expanded rosters of 40 players, with the number of players that could be selected from one franchise capped at seven. The Angels and Senators were limited to 28 picks each, and were forced to pay $75,000 per pick. There were also requirements to choose certain numbers of players for each position.[8]

The Angels were given the first overall pick in the expansion draft and used it to select New York Yankees pitcher Eli Grba. The Senators followed by taking another Yankees pitcher, Bobby Shantz, with their first choice.[9] Later in the draft, both teams violated the rules prohibiting existing clubs from losing more than seven players from their normal rosters; by the 43rd pick, the Cleveland Indians and Detroit Tigers had each seen eight of their players chosen, and another rule mandating that the Angels and Senators not take more than four players from any one team was also ignored. Angels manager Bill Rigney later said that the teams had not been notified about the rules by the AL.[1]

Despite an effort by AL president Joe Cronin that required both teams to relinquish earlier selections and choose different players, imbalances still existed in player selections; seven of the eight AL teams had had five or more players drafted by the Angels or Senators. In response, player trades between the expansion teams were mandated by Cronin. In the last of these trades, future Cy Young Award-winning pitcher Dean Chance was sent to Washington by the Angels.[1] 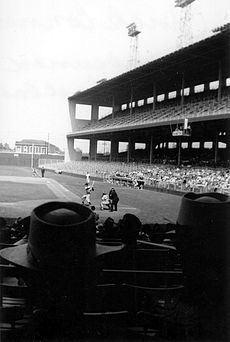 In 1961, Wrigley Field, a former minor league stadium, served as the home of the Angels; for the next four seasons, they shared Dodger Stadium with the Dodgers. Los Angeles won 70 games in its first season, exceeding expectations. The following season, they held first place in the AL as late as July 4, ending the year with 86 victories. However, the team's performance declined in future years, as its strategy of drafting "recognizable names" led to a barren minor league system that was unable to replace aging talent.[3]

The Senators experienced a lack of strong fan interest in their inaugural season, drawing under 600,000 fans for the year. The team annually posted about 90 defeats in most future years, and did not win more games than it lost until 1969, when Washington ended the season with an 86–76 win–loss record. The original owner of the club left early in the Senators' existence, and a second shift occurred shortly after stockbrokers James Johnson and James Lemon purchased the team from Elwood Quesada. In September 1971, then-owner Bob Short announced that the Senators would move to the Dallas area after the season; the team's last game in Washington was forfeited due to "unruly behavior" by Senators fans.[10]

The 1961 expansion was the first in a series of moves that resulted in MLB nearly doubling in size to 30 franchises. As part of MLB's effort to prevent the formation of the Continental League, the NL added the New York Mets and Houston Colt .45s (who later changed their nickname to the Astros) for the 1962 season.[3][11] Another expansion draft was made to stock the new teams for the 1962 season.[12] Four new clubs joined the AL and NL in 1969, in San Diego, Kansas City, Montreal, and Seattle (although the team moved to Milwaukee the following year). Further two-team expansions took place in 1977, 1993, and 1998.[3][13] The expansions had the effect of placing MLB teams across the country; before 1961, only 3 of the 16 teams were based west of the Mississippi River, and the old Senators were the southernmost franchise.[14]