The Country Club
Location in the United States 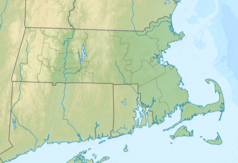 The Country Club
Location in Massachusetts

The 1963 U.S. Open was the 63rd U.S. Open, held June 20–23 at The Country Club in Brookline, Massachusetts, a suburb southwest of Boston. Julius Boros won his second U.S. Open title in an 18-hole Sunday playoff with Jacky Cupit and Arnold Palmer. The U.S. Open returned to The Country Club for the first time in fifty years to celebrate the golden anniversary of Francis Ouimet's playoff victory in 1913.[3][4]

Cupit owned the 54-hole lead by a stroke over Palmer, Tony Lema, and Walter Burkemo, with Boros in a group three behind. Boros recorded two birdies on his final three holes to post a 72 and 293 total. Cupit still held the lead until a double-bogey on the 17th dropped him into a tie with Boros and Palmer. He then missed a 12-footer for birdie at the last that would have won the championship.

During the playoff on Sunday, Boros took command early, taking a three-stroke lead to the back-nine. Palmer took himself out of contention with a triple-bogey at 11, while Cupit bogeyed the same hole. Boros cruised to the win from there, carding a 70 to Cupit's 73 and Palmer's 76. At 43, Boros was the second-oldest winner in U.S. Open history, and only a month younger than Ted Ray when he won the 1920 Open. For Palmer, it was the second consecutive year he lost in a playoff at the Open.[3]

High winds made scoring conditions extremely difficult throughout the entire week, especially on Saturday during the final two rounds, when gusts approached 50 mph (80 km/h).[3] The winning score of 293 remains the highest in post-World War II U.S. Open history, while the 77.4 final-round scoring average set a record for the post-war era. The latter mark, however, would be broken in 1972 at Pebble Beach. For the first time in U.S. Open history, no amateur made the cut.

First prize was $16,000, and each of the three playoff participants received a bonus of $1,500 from the playoff gate receipts.[2]