The 1964 National Convention of the Republican Party of the United States took place in the Cow Palace, Daly City, California, on July 13 to July 16, 1964. Before 1964, there had been only one (1956) national Republican convention on the West Coast. Many believed that a convention at San Francisco indicated the rising power of the Republican party in the west.[1]

The Republican primaries of 1964 featured liberal Nelson Rockefeller of New York and conservative Barry Goldwater of Arizona as the two leading candidates. Shortly before the California primary, Rockefeller's wife, whom he had just married the previous year soon after divorcing his previous wife, gave birth; this drew renewed attention to his family life which hurt his popularity among conservatives and led to Goldwater winning the primary.[citation needed] An anti-Goldwater organization called for the nomination of Governor William Scranton of Pennsylvania, but the effort failed. Although former President Dwight Eisenhower only reluctantly supported Goldwater after he won the nomination, former President Herbert Hoover gave him enthusiastic endorsement. By the end of the primaries, Goldwater's nomination was secure.

It was the only Republican convention between 1948 and 2008 that failed to feature Nixon, Dole or a Bush on the ticket. 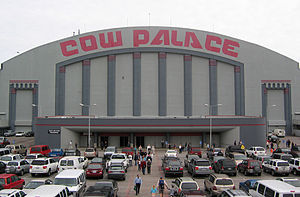 The Republican National Convention of 1964 was a tension-filled contest. Goldwater's conservatives were openly clashing with Rockefeller's moderates. Goldwater was regarded as the "conservatives' leading spokesman."[2] As a result, Goldwater was not as popular with the moderates and liberals of the Republican party.[3][4] When Rockefeller attempted to deliver a speech, he was booed by the convention's conservative delegates, who regarded him as a member of the "eastern liberal establishment." Despite the infighting, Goldwater was easily nominated. He chose William E. Miller, a Congressman from New York, as his running mate. In his acceptance speech, he declared communism as a "principal disturber of the peace in the world today" and said, "I would remind you that extremism in the defense of liberty is no vice. And let me remind you also that moderation in the pursuit of justice is no virtue." Some people, including those within his own campaign staff, believed this weakened Goldwater's chances, as he effectively severed ties with the moderates and liberals of the Republican Party.[5]

Former GOP presidential nominee Richard M. Nixon introduced the Arizonan as "Mr. Conservative" and "Mr. Republican" and he continued that "he is the man who, after the greatest campaign in history, will be Mr. President — Barry Goldwater".[6]

According to Emmy award-winning television journalist, Belva Davis, she and another black reporter were chased out of the convention by attendees yelling racial slurs.[7]

The 1964 Republican Platform was dominated by Goldwater conservatives, which meant the platform was dominated by calls for limited government, condemnations of the Kennedy and Johnson foreign and domestic policy, calls for more open space for free enterprise, a hard-line against Communist North Vietnam, calls for reform of the United Nations, a staunch support of NATO, calls for lower taxes, a hard-line against international Communism, and an accusation that the Kennedy-Johnson Administration was guilty of Munich-like appeasement for having opened a hotline with the Soviet Union and not with our allies.[8]

Candidates for the nomination

William E. Miller, a Congressman from Western New York who had served as Chairman of the Republican National Committee since 1961, was nominated unanimously on a roll call vote. Goldwater stated that he chose Miller to be his running mate simply because "he drives Johnson nuts" with his Republican activism. But by some other accounts, Johnson "was barely aware of Miller's existence."[attribution needed] Miller's Eastern roots and Catholic faith balanced the ticket in some ways, but ideologically he was conservative like Goldwater. His relative obscurity—"he was better known for snipes at President Kennedy than for anything else"—gave birth to the refrain "Here's a riddle, it's a killer / Who the hell is William Miller?"[9]

He was replaced as Chairman of the RNC by Dean Burch, a Goldwater loyalist from Arizona.