The 1966 FIFA World Cup, the eighth staging of the World Cup, was held in England from 11 to 30 July. England beat West Germany 4–2 in the final, winning the World Cup. With this victory, England won their first FIFA World Cup title and became the third World Cup host to win the tournament after Uruguay in 1930 and Italy in 1934.

The 1966 Final, held at Wembley Stadium,[1] was the last to be broadcast in black and white.[2] The tournament held a 28-year FIFA record for the largest average attendance until it was surpassed by the United States in 1994.

England was chosen as host of the 1966 World Cup in Rome, Italy on 22 August 1960, over opposition from West Germany and Spain.

Sixteen African nations boycotted the tournament in protest of a 1964 FIFA ruling that required the three second-round winners from the African zone to enter a play-off round against the winners of the Asian zone in order to win a place at the finals. The Africans felt that winning their zone was enough in itself to merit qualification for the finals.

Despite the Africans' absence, there was another new record number of entries for the qualifying tournament, with 70 nations taking part. After all the arguments, FIFA finally ruled that ten teams from Europe would qualify, along with four from South America, one from Asia and one from North and Central America.

Portugal and North Korea qualified for the first time. Portugal would not qualify again until 1986, while North Korea's next appearance was at the 2010 tournament. This was also Switzerland's last World Cup finals until 1994. Notable absentees from this tournament included 1962 semi-finalists Yugoslavia and 1962 finalists Czechoslovakia.

The format of the 1966 competition remained the same as 1962: 16 qualified teams were divided into four groups of four. Each group played a round-robin format. Two points were awarded for a win and one point for a draw, with goal average used to separate teams equal on points. The top two teams in each group advanced to the knockout stage.

The 1966 World Cup had a rather unusual hero off the field, a dog called Pickles. In the build-up to the tournament, the Jules Rimet trophy was stolen from an exhibition display. A nationwide hunt for the icon ensued. It was later discovered wrapped in newspaper as the dog sniffed under some bushes in London. The FA commissioned a replica cup in case the original cup was not found in time. This replica is held at the English National Football Museum in Manchester, where it is on display.[3]

The draw for the final tournament, taking place on 6 January 1966 at the Royal Garden Hotel in London was the first ever to be televised, with England, West Germany, Brazil and Italy as seeds.[4]

1966 was a World Cup with few goals as the teams began to play much more tactically and defensively. This was exemplified by Alf Ramsey's England as they finished top of Group 1 with only four goals to their credit, but having none scored against them. They also became the first World Cup winning team not to win its first game in the tournament. Uruguay were the other team to qualify from that group at the expense of both Mexico and France. All the group's matches were played at Wembley Stadium apart from the match between Uruguay and France which took place at White City Stadium. In Group 2, West Germany and Argentina qualified with ease as they both finished the group with 5 points, Spain managed 2, while Switzerland left the competition after losing all three group matches. FIFA cautioned Argentina for its violent style in the group games, particularly in the scoreless draw with West Germany, which saw Argentinean Rafael Albrecht get sent off and suspended for the next match.[5][6]

In the northwest of England, Old Trafford and Goodison Park played host to Group 3 which saw the two-time defending champions Brazil finish in third place behind Portugal and Hungary, and be eliminated along with Bulgaria. Brazil were defeated 3–1 by Hungary in a classic encounter before falling by the same scoreline to Portugal in a controversial game; this was Brazil's worst performance in any World Cup. Portugal appeared in the finals for the first time, and made quite an impact. They won all three of their games in the group stage, with a lot of help from their outstanding striker Eusébio, whose nine goals made him the tournament's top scorer.

Group 4, however, provided the biggest upset when North Korea beat Italy 1–0 at Ayresome Park, Middlesbrough and finished above them, thus earning qualification to the next round along with the Soviet Union. This was the first time that a nation from outside Europe or the Americas had progressed from the first stage of a World Cup: the next would be Morocco in 1986.

The quarter-finals provided a controversial victory for West Germany as they cruised past Uruguay 4–0; the South Americans claimed that this occurred only after the referee (who was Jim Finney, from England) had not recognised a handball by Schnellinger on the goal line and then had sent off two players from Uruguay: Horacio Troche and Héctor Silva.[7] It appeared as though the surprise package North Korea would claim another major upset in their match against Portugal when after 22 minutes they lead 3–0. It fell to one of the greatest stars of the tournament, Eusébio, to change that. He scored four goals in the game and José Augusto added a fifth in the 78th minute to earn Portugal a 5–3 win.

Meanwhile, in the other two games, Ferenc Bene's late goal for Hungary against the Soviet Union, who were led by Lev Yashin's stellar goalkeeping, proved little more than a consolation as they crashed out 2–1, and the only goal between Argentina and England came courtesy of England's Geoff Hurst. During that controversial game (for more details see Argentina and England football rivalry), Argentina's Antonio Rattín became the first player to be sent off in a senior international football match at Wembley.[8] Rattín at first refused to leave the field and eventually had to be escorted by several policemen. After 30 minutes England scored the only goal of the match. This game is called el robo del siglo (the robbery of the century) in Argentina.[9] 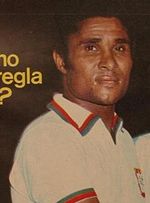 Eusébio finished as the tournament's top scorer, and also featured in the all-star team

All semi-finalists were from Europe. The venue of the first semi-final between England and Portugal was changed from Goodison Park in Liverpool to Wembley, due to Wembley's larger capacity. This larger capacity was particularly significant during a time when ticket revenue was of crucial importance.[10] Bobby Charlton scored both goals in England's win, with Portugal's goal coming from a penalty in the 82nd minute after a handball by Jack Charlton on the goal line.[11] [12] The other semi-final also finished 2–1: Franz Beckenbauer scoring the winning goal with a left foot shot from the edge of the area for West Germany as they beat the Soviet Union.[13] Portugal went on to beat the Soviet Union 2–1 to take third place. Portugal's third place remains the best finish by a team making its World Cup debut since 1934. It was subsequently equalled by Croatia in the 1998 tournament.

London's Wembley Stadium was the venue for the final, and 98,000 people attended. After 12 minutes 32 seconds Helmut Haller put West Germany ahead, but the score was levelled by Geoff Hurst four minutes later. Martin Peters put England in the lead in the 78th minute; England looked set to claim the title when the referee awarded a free kick to West Germany with one minute left. The ball was launched goalward and Wolfgang Weber scored, with England appealing in vain for handball as the ball came through the crowded penalty area.[14]

With the score level at 2–2 at the end of 90 minutes, the game went to extra time. In the 98th minute, Hurst found himself on the scoresheet again; his shot hit the crossbar, bounced down onto the goal line, and was awarded as a goal. Debate has long raged over whether the ball crossed the line, with the goal becoming part of World Cup history; Ian Reid and Andrew Zisserman claim to prove that the ball did not cross the line.[15] England's final goal was scored by Hurst again, as a celebratory pitch invasion began. This made Geoff Hurst the only player ever to have scored three times in a World Cup final.[14] BBC commentator Kenneth Wolstenholme's description of the match's closing moments has gone down in history: "Some people are on the pitch. They think it's all over ... [Hurst scores] It is now!".[16]

England received the recovered Jules Rimet trophy from Elizabeth II and were crowned World Cup winners for the first time.[14]

In this World Cup edition, although had the ceremony with the military bands during the players entrance to the pitch, the national anthems were not played. This was because England feared that North Korea's presence - a socialist country that is not recognized by United Kingdom - in the World Cup would cause problems with South Korea. An office memo of the Foreign Office months before the finals stated that the solution would be "denying the visas to North Korean players".[17]

World Cup Willie, the mascot for the 1966 competition, was the first World Cup mascot, and one of the first mascots to be associated with a major sporting competition. World Cup Willie is a lion, a typical symbol of the United Kingdom, wearing a Union Flag jersey emblazoned with the words "WORLD CUP".

Eight venues were used for this World Cup. The youngest and biggest venue used was Wembley Stadium in west London, which was 43 years old in 1966. As was often the case in the World Cup, groups played in two venues in close proxmity to each other. Group 1's matches (which included the hosts) were all played in London: five at Wembley, which was England's national stadium and was considered to be the most important football venue in the world; and one at White City Stadium in west London, which was used as a temporary replacement for nearby Wembley. The Uruguay-France group stage game played at White City Stadium (originally built for the 1908 Summer Olympics) was scheduled for a Friday, the same day as regularly scheduled greyhound racing at Wembley. Because Wembley's owner refused to cancel this, the game had to be moved to the alternative venue in London. Group 2's matches were all played at Sheffield Wednesday F.C.'s Hillsborough Stadium in Sheffield and Aston Villa's Villa Park in Birmingham, Group 3's matches were only played at Manchester United's Old Trafford stadium in Manchester and Everton F.C.'s Goodison Park in Liverpool; and Group 4's matches were played exclusively at Middlesbrough F.C.'s Ayresome Park in Middlesbrough and Sunderland A.F.C.'s Roker Park in Sunderland; both located in northern England.

The most used venue was Wembley, which was used for nine matches, including all of England's six matches, the final and the third place match. Goodison Park was used for five matches; Roker Park and Hillsborough both hosted four matches. Old Trafford, Villa Park and Ayresome Park each hosted 3 matches and did not host any knockout round matches.

For a list of all squads that appeared in the final tournament, see 1966 FIFA World Cup squads.

With nine goals, Eusébio was the top scorer in the tournament. In total, 89 goals were scored by 47 different players, with two of them credited as own goals.

In 1986, FIFA published a report that ranked all teams in each World Cup up to and including 1986, based on progress in the competition, overall results and quality of the opposition.[18][19] The rankings for the 1966 tournament were as follows: