The 1966 FIFA World Cup Final was the final match in the 1966 FIFA World Cup, the eighth football World Cup and one of the most controversial finals ever.[1] The match was played by England and West Germany on 30 July 1966 at Wembley Stadium in London, and had an attendance of 96,924.[2] The British television audience peaked at 32.30 million viewers, making the final the most watched television event ever in the United Kingdom.[3]

England won 4–2 after extra time to win the Jules Rimet Trophy. The England team became known as the "wingless wonders", on account of their then-unconventional narrow attacking formation, described at the time as a 4–4–2.[4] The match is remembered for England's only World Cup trophy, Geoff Hurst's hat-trick – the first one ever scored in a World Cup Final – and the controversial third goal awarded to England by referee Gottfried Dienst and linesman Tofiq Bahramov.

Both teams were strong throughout the tournament. Each won all but one of their three matches in the group stages, which they both drew. West Germany tied against Argentina, while England drew against Uruguay, at that time tied for the number of World Cups won with Italy and Brazil. The German team conceded but two goals before the final, and England did not concede at all until their semi-final against Portugal.

England, managed by Alf Ramsey and captained by Bobby Moore, won the toss and elected to kick off. After 12 minutes, Siegfried Held sent a cross into the English penalty area which Ray Wilson misheaded to Helmut Haller, who got his shot on target. Jackie Charlton and goalkeeper Gordon Banks failed to deal with the shot which went in making it 1–0 to West Germany.

In the 19th minute, Wolfgang Overath conceded a free kick, which Moore took immediately, floating a cross into the West German area, where Geoff Hurst rose unchallenged and levelled the scores with a downward glancing header. The teams were level at half-time, and after 77 minutes England won a corner. Alan Ball delivered the ball to Geoff Hurst whose deflected shot from the edge of the area found Martin Peters. He produced the final shot, beating the West German keeper from eight yards to make the score 2–1 to England.[5]

Germany pressed for an equaliser in the closing moments, and in the 89th minute Jack Charlton conceded a free kick for climbing on Uwe Seeler as they both went up for a header.[5] The kick was taken by Lothar Emmerich, who struck it into George Cohen in the wall; the rebound fell to Held, who shot across the face of goal and into the body of Karl-Heinz Schnellinger. The ball deflected across the England six-yard box, wrong-footing the England defence and allowing Wolfgang Weber to level the score at 2–2 and force the match into extra time. Banks protested that the ball had struck Schnellinger on the arm, and reiterated the claim in his 2002 autobiography,[6] but replays showed that it actually struck Schnellinger on the back.[5][7]

England pressed forward and created several chances. In particular, with five minutes gone, Bobby Charlton struck the post and sent another shot just wide. With 11 minutes of extra time gone, Alan Ball put in a cross and Geoff Hurst swivelled and shot from close range. The ball hit the underside of the cross bar, bounced down – on the line – and was cleared. The referee Gottfried Dienst was uncertain if it had been a goal and consulted his linesman, Tofiq Bahramov from Azerbaijan in the USSR, who in a moment of drama indicated that it was. After non-verbal communication, as they had no common language, the Swiss referee awarded the goal to the home team. The crowd and the audience of 400 million television viewers were left arguing whether the goal should have been given or not.[8]

England's third goal has remained controversial ever since the match. According to the Laws of the Game the definition of a goal is when "the whole of the ball passes over the goal line".[9]

In England, supporters cite the good position of the linesman and the statement of Roger Hunt, the nearest England player to the ball, who claimed it was a goal and that was why he wheeled away in celebration rather than attempting to tap the rebounding ball in.

Modern studies using film analysis and computer simulation have conclusively proved the ball never crossed the line – both Duncan Gillies of the Visual Information Processing Group at Imperial College London and Ian Reid and Andrew Zisserman of the Department of Engineering Science at University of Oxford agree that the ball would have needed to travel a further 2.5–6.0 cm to fully cross the line, and that therefore it was not a goal.[10] Furthermore, there exists colour footage of Hurst's goal, taken from another angle by an amateur cameraman in the stands and having a view almost parallel to the English goal line. This film material shows that the ball did not cross the goal line in full.[11]

Some Germans cited possible bias of the Soviet linesman (Bakhramov was from Azerbaijan),[12] especially as the USSR had just been defeated in the semi-finals by West Germany.[13] Bakhramov later stated in his memoirs that he believed the ball had bounced back not from the crossbar, but from the net and that he was not able to observe the rest of the scene, so it did not matter where the ball hit the ground anyway. (An apocryphal story exists that Bakhramov, when asked why he gave the goal later, simply replied "Stalingrad". There is no evidence that this is genuine.) Swiss referee Gottfried Dienst did not see the scene.

One minute before the end of play, the West Germans sent their defenders forward in a desperate attempt to score a last-minute equaliser. Winning the ball, Bobby Moore picked out the unmarked Geoff Hurst with a long pass, which Hurst carried forward while some spectators began streaming onto the field and Hurst scored moments later. Hurst later admitted that his blistering shot was as much intended to send the ball as far into the Wembley stands as possible should it miss, in order to kill time on the clock.[14] 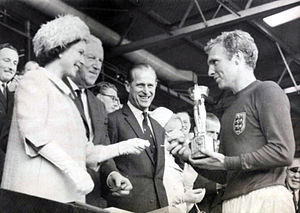 The final goal gave rise to one of the most famous sayings in English football, when the BBC commentator Kenneth Wolstenholme described the situation as follows:

One of the balls from the final is now on display in the National Football Museum in Manchester. 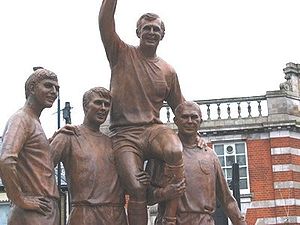 The World Cup Sculpture featuring Moore with the World Cup trophy, on the shoulders of Geoff Hurst and Ray Wilson, together with Martin Peters

One of the enduring images of the celebrations in Wembley immediately after the game was the picture of the captain Bobby Moore holding the Jules Rimet Trophy aloft, on the shoulders of Geoff Hurst and Ray Wilson, together with Martin Peters. In recognition of Moore and other West Ham United players' contribution to the win, the club and Newham Borough Council jointly commissioned a statue of this scene. On 28 April 2003 Prince Andrew as president of The Football Association, duly unveiled the World Cup Sculpture (also called The Champions) in a prominent place near West Ham's Boleyn Ground (Upton Park), at the junction of Barking Road and Green Street. The one and a half life-size bronze piece was sculpted by Philip Jackson.[16] 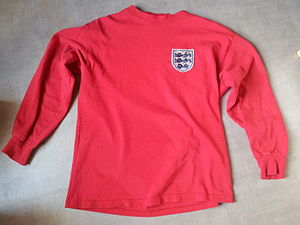 Replica of the English shirt for the final

The final is the most watched event ever on British television, as of January 2012, attracting 32.30 million viewers.[3] In Germany, a goal resulting from a shot bouncing off the crossbar and hitting the line is called a Wembley-Tor (Wembley Goal) due to the controversial nature of Hurst's second goal. This goal has been parodied a large number of times. Some of the most notable include:

In August 1966 a special 4d stamp marked ENGLAND WINNERS was issued by the Royal Mail to celebrate the victory and which soared in value to up to 15 shillings each on the back of public enthusiasm for the victory before falling back in value when the public realised it was not rare.

The 1991 BBC miniseries Sleepers, about a pair of deep-cover KGB agents placed in England in the mid-1960s and then forgotten includes a subplot about an archive film of the match recorded by Soviet agents and then placed in archives. A KGB officer who sees the film in the early 1990s is excited to discover it includes footage of the disputed goal and attempts to sell it to a contact at a television network (pointedly described as not the BBC). Sleepers is coy about what the film depicts and in the course of the story, the film is destroyed.

England's win in the final also helped fans to create the "Two World Wars and One World Cup" chant.[13]

The players and staff of England's winning squad who did not get medals in 1966 received them on 10 June 2009 after a ceremony at 10 Downing Street in London. Initially, only the 11 players on the pitch at the end of the match received medals, but FIFA later awarded medals to every non-playing squad and staff member from every World Cup-winning country from 1930 to 1974.[17]