The 1968 Formula One season included the 19th FIA Formula One World Championship season, which commenced on 1 January 1968, and ended on 3 November after twelve races.

Although they had failed to win the title in 1967, by the end of the season the Lotus 49 and the DFV engine were mature enough to make the Lotus team dominant again. For 1968 Lotus lost its exclusive right to use the DFV. McLaren built a new DFV-powered car and a new force appeared on the scene when Ken Tyrrell entered his own team using a Cosworth-powered car built by French aeronautics company Matra and driven by ex-BRM driver Jackie Stewart.

Unsurprisingly the season-opening 1968 South African Grand Prix confirmed Lotus' superiority, with Jim Clark and Graham Hill finishing 1–2. It would be Clark's last win. On 7 April 1968 Clark, one of the most successful and popular drivers of all time, was killed at Hockenheim in a non-championship Formula Two event.

The season saw two significant innovations. The first was the arrival of unrestricted sponsorship, which the FIA decided to permit that year after the withdrawal of support from automobile related firms like BP, Shell and Firestone. In May the Lotus Formula One team appeared at Jarama in the Red, Gold and White colors of Imperial Tobacco's Gold Leaf brand. The second innovation was the introduction of wings as seen previously on various cars including the Chaparral 2F sports car. Colin Chapman introduced modest front wings and a spoiler on Graham Hill's Lotus 49B at Monaco. Brabham and Ferrari went one better at the Belgian Grand Prix with full width wings mounted on struts high above the driver. Lotus replied with a full width wing directly connected to the rear suspension that required a redesign of suspension wishbones and transmission shafts. Matra then produced a high mounted front wing connected to the front suspension. This last innovation was mostly used during practice as it required a lot of effort from the driver. By the end of the season most teams were using sophisticated wings.

Despite the death of Jim Clark, Lotus won both titles in 1968 with Graham Hill, but Stewart was a serious contender, winning several Grands Prix in the Tyrrell-run Matra MS10. Stewart's winning drive during the rain and fog of the 1968 German Grand Prix at the Nürburgring, where he won by a margin of four minutes, is considered as one of the finest ever, even though his rain tires were probably better than those of the competition. The car's most innovative feature was the use of aviation-inspired structural fuel tanks. These allowed the chassis to be around 15 kg lighter, while still being stronger than its competitors. The FIA considered the technology to be unsafe and decided to ban it for 1970, insisting on rubber bag-tanks (Which meant the effective end of spaceframe chassis in F1). Safety became a major issue in Formula One.

McLaren fielded a pair of Cosworth powered M7s for reigning Formula One World Champion Denny Hulme and team founder Bruce McLaren. McLaren won the non-championship Brands Hatch Race of Champions, then the Belgian Grand Prix was the scene of the team's first Championship win. In doing so, McLaren became only the third driver to win a race in a car manufactured by his own team – Jack Brabham having done it in 1966 and Dan Gurney in 1967 at Spa Francorchamps. Hulme won the Italian Grand Prix and Canadian Grand Prix later in the year.

Repco produced a more powerful version of their V8 to maintain competitiveness against Ford's new Cosworth DFV, but it proved very unreliable. The Brabhams were fast — Rindt set pole position twice during the season — but Brabham and Rindt finished only three races between them, and ended the year having scored just ten points.[1]

1968 turned out to be a turning point in the history of Formula One, in terms of technicalities and safety. Wings were used on Formula One cars and aerodynamics really played a part in terms of the cars' performance, and 5 Grand Prix drivers were killed in this year – including Jim Clark, Mike Spence, Jo Schlesser and Ludovico Scarfiotti – Clark at a Formula 2 race at Hockenheim in a Lotus in April, Spence during practice for the Indianapolis 500 in a Lotus in May, Scarfiotti during a hillclimb event in Germany driving a Porsche sportscar in June, and Schlesser during the French Grand Prix driving a Honda in July. It was the last year where all the races were run on tracks with almost no safety modifications. The rather dubious events of the season included Schlesser's almost recklessly caused fatal accident at Rouen Les Essarts and the German Grand Prix run in atrocious rain and thick fog at the dangerous and long Nürburgring, a race that was even questioned at the start to be run in the almost intolerable conditions.

The following teams and drivers competed in the 1968 FIA World Championship. 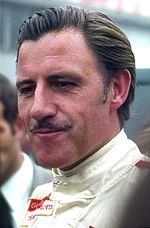 Other Formula One races held in 1968, which did not count towards the World Championship.