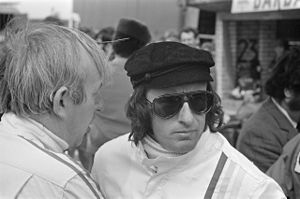 The 1971 Formula One season included the 22nd FIA Formula One World Championship season, which commenced on 6 March 1971, and ended on 3 October after eleven races.

After the death of Jochen Rindt the previous year, Lotus had a desultory season, with young and inexperienced drivers such as Emerson Fittipaldi appearing in the cars. The team spent a lot of time experimenting with a gas turbine powered car, and with four wheel drive again. Using their own chassis heavily inspired by the Matra MS80 but with conventional tanks, Tyrrell and Jackie Stewart easily took success in 1971. Of the 11 races in the season, Mario Andretti, Jacky Ickx, Jo Siffert, Peter Gethin and François Cevert won one race each, while Stewart won the other 6 races.

Jo Siffert and Pedro Rodríguez, who had an intense rivalry driving for John Wyer's Gulf-sponsored works Porsche endurance sportscar team both lost their lives racing in 1971. Rodriguez died driving a Ferrari 512 at an Interserie race at the Nosiring, Germany in July; and Siffert died in a fiery crash at the World Championship Victory Race non-championship Formula One event at Brands Hatch in October.

The Belgian Grand Prix was originally supposed to be held on 6 June (between the Monaco and Dutch Grands Prix), at the notorious 8.7 mile (14.1 km) Spa-Francorchamps circuit, but the failure of the track owners and authorities to bring Spa up to mandatory safety specs meant that the circuit was deemed unsuitable for Formula One cars to race on and the event was promptly cancelled.[1] And the Mexican Grand Prix was originally supposed to be the last race of the year, but the FIA cancelled the race because of the previous year's events, where a gigantic crowd turned up to see the race and they were situated in front of the barriers during the race.

This was the first season where at least 22 cars started every race, except the Monaco Grand Prix, where 18 cars started.

The following teams and drivers competed in the 1971 FIA World Championship. 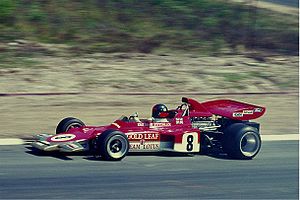 Other Formula One races were also held in 1971, which did not count towards the World Championship.