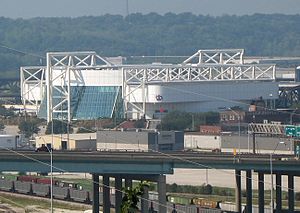 Kemper Arena was the site of the 1976 Republican National Convention

The 1976 Republican National Convention was a United States political convention of the Republican Party that met from August 16 to August 19, 1976 to select the party's nominee for President. Held in Kemper Arena in Kansas City, Missouri, the convention nominated President Gerald Ford for a full term, but only after narrowly defeating a strong challenge from former California Governor Ronald Reagan. The convention also nominated Senator Robert J. Dole of Kansas for Vice President, instead of Vice President Nelson Rockefeller. The keynote address was delivered by Tennessee Senator Howard Baker.

The 1976 Republican National Convention was the last major party convention, as of 2012[update], where the party's nominee was not decided before the primary process concluded.

Situation at the opening of the convention

Going into the convention, Ford had won more primary delegates than Reagan, as well as a plurality in popular vote. However, Ford did not have enough to secure the nomination, and as the convention opened both candidates were seen as having a chance to win. Because of this, both Ford and Reagan arrived in Kansas City before the convention opened to woo the remaining uncommitted delegates in an effort to secure the nomination. Reagan benefited from his highly committed delegates, notably "Reagan's Raiders" of the Texas delegation. They and other conservative Western and Southern delegates particularly faulted the Ford Administration's foreign policy of détente towards the Soviet Union, criticizing his signing of the Helsinki Accords and indirectly blaming him for the April 1975 Fall of Saigon. The pro-Reagan Texas delegates worked hard to persuade delegates from other states to support Reagan. Ford, meanwhile, used all of the perks and patronage of the Presidency to win over wavering delegates, including trips aboard Air Force One and personal meetings with the President himself.

Richard Schweiker gambit and the search for an alternative

Reagan had promised, if nominated, to name Senator Richard Schweiker of Pennsylvania as his running mate, in a bid to attract liberals and centrists in the party. This move backfired, however, as many conservatives (such as Senator Jesse Helms) were infuriated by Reagan's choice of the "liberal" Schweiker, while few moderate delegates switched to Reagan. Helms promptly began a movement to draft Conservative Senator James L. Buckley of New York as the presidential nominee.

The key vote of the convention occurred when Reagan's managers proposed a rules change that would have required Ford to publicly announce his running mate before the presidential balloting. Reagan's managers hoped that when Ford announced his choice for vice-president, it would anger one of the two factions of the party and thus help Reagan. Ford's supporters derisively described the proposed rules change as the "misery loves company" amendment.[citation needed] The proposed rules change was defeated by a vote of 1180 to 1069, and Ford gained the momentum he needed to win the nomination. The balloting for president was still close, however, as Ford won the nomination with 1187 votes to 1070 votes for Reagan (and one for Elliot L. Richardson of Massachusetts).

Conservatives succeeded in inserting several key planks into the party platform, some of which were implicitly critical of the President's own policies.[1] Reagan and North Carolina Senator Jesse Helms successfully had a "moral foreign policy" plank inserted. In light of the 1973 Roe v. Wade decision, the 1976 Republican platform became the first to advocate a Human Life Amendment to the Constitution.

Both Ford and Reagan's names were put into nomination. This was the last time during the 20th Century that this was permitted. 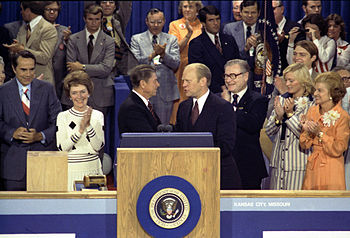 The 1976 Republican National Convention at Kemper Arena in Kansas City. Vice-Presidential Candidate Bob Dole is on the far left, then Nancy Reagan, Ronald Reagan is at the center shaking hands with President Gerald Ford, Vice-President Nelson Rockefeller is just to the right of Ford, followed by Susan Ford and First Lady Betty Ford.

With the outcome not a forgone conclusion, the balloting would be the most exciting it would be for the rest of the 20th century and into the 21st. 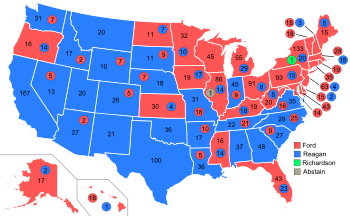 First ballot vote for the presidential nomination by state delegations

While desperately trying to secure enough delegates to be nominated, the President's campaign did not neglect the selection of a running mate, especially with Reagan's Schweicker ploy. Among the many people considered were;

Ford selected Kansas Senator Robert J. Dole as his running-mate in preference to Vice President Nelson Rockefeller; Rockefeller had announced that he did not wish to be a candidate for Vice President in 1976 the previous fall, in no small part because it was believed that Rockefeller was too far to the left to be acceptable to the G.O.P. base.

Some of the Reagan delegates, angry with the loss of their man, decided to scatter their votes among over 30 people. Jesse Helms' name was put into nomination.[3]

"Reagan's impromptu concession speech has been called a "defining moment of the Reagan Revolution."

Reagan endorsed Ford after his defeat, and gave an eloquent and stirring speech that overshadowed Ford's own acceptance address. Some delegates later stated that they left the convention wondering if they had voted for the wrong candidate.[4] A contemporary media account stated that if a motion to reconsider the nomination had been in order, it might have passed.[5]