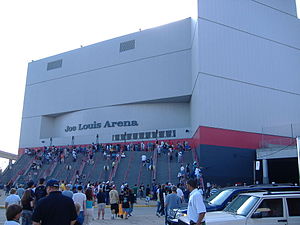 The 1980 National Convention of the Republican Party of the United States convened at Joe Louis Arena in Detroit, Michigan, from July 14 to July 17, 1980. The Republican National Convention nominated former Governor Ronald W. Reagan of California for President and former congressman George H. W. Bush of Texas for Vice President.[1] Reagan, running on the theme "Make America Great Again," stayed in Detroit's Renaissance Center, at the time the world's tallest hotel, and delivered his acceptance speech at Joe Louis Arena.[2] It remains the only major party national political convention to have been held in Detroit. 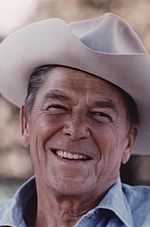 Under rules devised by the Nixon administration in 1972, only one candidate was permitted to have his name placed in nomination: Ronald Reagan. Thus thwarting an attempt by John B. Anderson to have a speaker at the convention. John Connally's expensive campaign yielded only one delegate, (still the most expensive in history to date), who loyally stood by her man to the end.

The Vice Presidential slot was the subject of some high drama which threatened to change the face government forever, but in the end didn't.

Gerald Ford and a possible "co-presidency"

During the convention, the possibility of choosing former president Gerald Ford as the vice-presidential nominee was given at least some consideration. Ford asked for certain powers and prerogatives that has been described as making Ford a co-president. This included the return of Henry Kissinger as Secretary of State and the appointment of Alan Greenspan as Secretary of the Treasury in a "package deal". The two sides could not come to an agreement, and ultimately George Bush was chosen less than 24 hours before the ticket was announced.[4] Reagan chose Bush as the Republican vice presidential candidate.

Even though former Governor Reagan had taken the unprecedented step of announcing his VP choice from the podium of the convention itself, some delegates still resented Bush for having the effrontery to beat their hero in a number of primaries, and especially the Iowa caucuses. There was some scattering, and a minor challenge, which as seen below, went nowhere. This would be the last time during the 20th century that the bottom half of the ticket would be contested, as the rules would be changed in 1988 to prevent this from happening.

The following had their names placed in nomination: