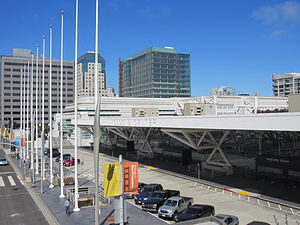 The 1984 National Convention of the U.S. Democratic Party was held at the Moscone Center in San Francisco, California from July 16 to July 19, 1984, to select a candidate for the 1984 United States presidential election. Former Vice President Walter Mondale was nominated for President and Representative Geraldine Ferraro of New York was nominated for Vice President. Ferraro became the first woman to be nominated by either major party for the Presidency or Vice-Presidency. In another first, the 1984 Democratic Convention was chaired by the female governor of Kentucky, Martha Layne Collins.[1] The Democratic National Committee Chairman at the time, Charles T. Manatt, led the convention.

Events of the Convention

Jackson also attempted to move the party's platform farther to the left at the Convention, but without much success. He did succeed in one instance, concerning affirmative action.[2]

The candidates for U.S. president earned the following numbers of delegates:[4]

Jesse Jackson unsuccessfully called for the suspension of the party's electoral rules to give him a number of delegates closer to the 20% average share of the vote he garnered during the primaries. The system tended to punish shallow showings as yielding no delegates at all, hence Jackson's smaller delegate count than would be expected (12%).[2]

Geraldine Ferraro was nominated by acclamation on a voice vote. She became the first woman to receive a major party nomination in the US.