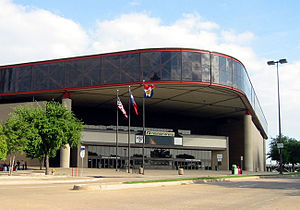 The 1984 National Convention of the Republican Party of the United States convened on August 20 to August 23, 1984, at Dallas Convention Center in downtown Dallas, Texas. The convention nominated President Ronald W. Reagan and [1] Vice President George H. W. Bush for reelection.

Reagan's popularity had rebounded after the early 1980s recession, and he became the first incumbent president since Lyndon B. Johnson in 1964 to run without serious opposition in the primary. The keynote address on August 20 was delivered by Katherine Ortega, Treasurer of the United States. Other speakers included Elizabeth Dole, United States Secretary of Transportation; Jeane Kirkpatrick, U.S. Ambassador to the United Nations (who delivered her now-famous "Blame America First" speech [2]); and Congressman Jack Kemp of Buffalo, New York.

The convention also included a valedictory address by retiring U.S. Senator Barry Goldwater of Arizona. Goldwater was widely credited as the political founder of the New Right in the United States, of which Reagan was the political heir, and indeed Reagan had gained notice for his "A Time for Choosing" speech supporting Goldwater in October 1964. Vice President George Bush gave a powerful address, some believing it debuted him as the de facto nominee of the GOP in 1988. President Reagan spoke after, and addressed the nation and the party on the future and highlighted the "Morning in America". Country singer Lee Greenwood was also featured, and sang God Bless the USA, as it had debuted that year.

Having run without opposition, President Reagan was nominated unanimously on the roll call vote. To save time, the Vice Presidential vote was held simultaneously, with Vice President Bush receiving 2,042 votes and Jack Kemp and Anne Armstrong receiving one vote each. This would be the last Vice Presidential tally at a Republican Convention during the 20th century.

The convention was recruited to Dallas by the chairman of the host committee, later Texas state Republican chairman, Fred Meyer, a Dallas business who was then the president of the Tyler Corporation.[3]

The Dallas Police Department, under Police Chief Billy Prince, was charged with providing security for the convention, including that of the delegates and President Ronald Reagan and Vice President George Bush. Security planning, preparations and training for the event began in the police department a year in advance of the convention. President Reagan and Vice President Bush were scheduled to be housed in separate towers of the Anatole Hotel complex near downtown. Key commanders of the security plan included:

The only incident of any consequence to occur during the convention was when the so-called Yippies made their last headlines. On Wednesday, August 22, 1984, a group of protesters calling itself the "Corporate War Chest Tour" conducted a minor theft and vandalism spree against businesses in downtown Dallas. Under the security plan, various police response teams were mobilized consisting primarily of the Demonstration Management teams under the command of Captain Hawkins and the Presidential Hotel Response Teams, commanded by Lieutenant Stone, which were held in reserve on the eastern perimeter of downtown. Dozens of protesters were peacefully arrested including, Revolutionary Communist Youth Brigade member Gregory Lee Johnson, who burned a U.S. flag, which had been stolen from a flagpole in front of a downtown building. Johnson was charged with Desecration of Venerated Object, a misdemeanor violation of the Texas Penal Code. He was later convicted and his conviction was upheld at the state level. Johnson appealed the conviction to the federal courts, arguing that burning the flag was protected by the First Amendment to the United States Constitution. The case of Texas v. Johnson was appealed to the United States Supreme Court, which ruled on June 21, 1989 in Johnson's favor and invalidated flag desecration statutes throughout the country. The remains of the charred flag were gathered by a civil servant, Daniel E. Walker of Fort Worth, who buried them according to military protocol in his backyard.[5]