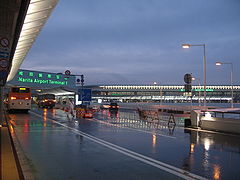 The bombing is believed to have been planned by the same conspirators who brought down Air India Flight 182 by a bomb that went off nearly an hour later, when the plane was off the west coast of Ireland. Sikh extremists living in Canada are believed to be responsible for both bombings, but only Inderjit Singh Reyat, who lived in Duncan, British Columbia, was convicted in Canadian court. He was found guilty in 1991 in the Narita bombing. In 2003, shortly before the start of the Air India trial, he made a plea bargain on reduced charges and a promise of testimony against other suspects. He made the bombs used in both incidents.

Timeline of the Incident

At 0619 GMT, a piece of luggage that had come from CP Air 3 exploded as it was being transferred to Air India Flight 301; the explosion killed two Japanese baggage handlers (Hideo Asano and Hideharu Koda) in Narita Airport and injured four other people.

At 0714 GMT, Air India Flight 182 exploded in mid-air off the west coast of Ireland, falling into the sea. All 329 people on board were killed. Investigation by Canada has revealed connections between the two bombings.

At 0805 GMT, Air India Flight 301 left Narita and arrived in Thailand unscathed and with no incidents.

May 10, 1991 – Inderjit Singh Reyat receives a ten-year sentence after being convicted of two counts of manslaughter terms and four explosives charges relating to the Narita Airport 1985 bombing.

Fifty-five minutes after, at 08:14 Irish time, Air India Flight 182 exploded mid-air and plunged into the Atlantic Ocean off the west coast of Ireland, killing 329 people. Canadian security forces believe that the incidents were related, as noted in a 2010 report by a government commission. They were both developed by Babbar Khalsa, the Sikh separatist group operating in Canada. They think the bombings were intended to be simultaneous, but the terrorist planners were not aware that, while Canada observes daylight saving time, Japan does not.

The trial for the Narita bombing took place in Canada in 1991. The only man convicted of any involvement in the bombings was Inderjit Singh Reyat, a British Columbia resident who had built the bombs used. He received a ten-year sentence of two counts of manslaughter and four explosives charges after being found guilty in May 1991 of the Narita bombing in federal court in Vancouver, British Columbia.

In 2003, weeks before the start of the Air India Flight 182 trial, Reyat cut a deal with prosecutors. In exchange for pleading guilty to the charge of manslaughter in the Flight 182 bombing, he was sentenced to five years in prison. He also had to testify against the two other men tried in Canada for these incidents, Ripudaman Singh Malik and Ajaib Singh Bagri. Justice Ian Josephson acquitted them, as he believed that the prosecutors had not been able to meet the standard of proof "beyond a reasonable doubt."

In reading the verdicts of Malik and Bagri, Justice Josephson commented about Reyat's testimony at their trial:

Even the most sympathetic of listeners could only conclude, as do I, that his evidence was patently and pathetically fabricated in an attempt to minimize his involvement in his crime to an extreme degree, while refusing to reveal relevant information he clearly possesses. His hollow expression of remorse for his crime must have been a bitter pill for the families of the victims.

In 2006 Crown Counsel in British Columbia announced they would be charging Reyat with perjury, based on his testimony at the Air India Flight 182 trial. It is alleged that he committed perjury 27 times during his testimony. In 2008, the court granted bail; he had already served 20 years in jail since his first arrest. The trial on perjury charges was scheduled for 2009.[1] He was convicted of perjury in 2011 and sentenced to nine years, with seventeen months' credit for time already served.[2]