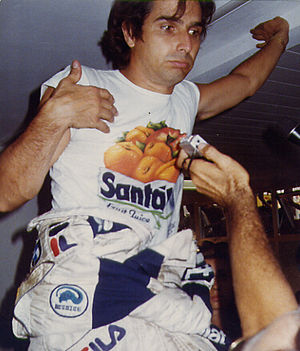 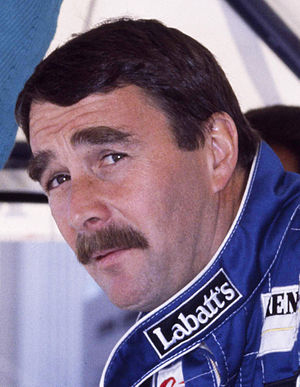 The 1987 Formula One season was the 38th season of Formula One motor racing. It featured the 1987 FIA Formula One World Championship for Drivers and Constructors which commenced on 12 April 1987 and ended on 15 November after sixteen races. This championship also encompassed the Jim Clark Trophy and the Colin Chapman Trophy which were contested respectively by drivers and constructors of Formula One cars powered by naturally aspirated engines.

The 1987 World Championship featured a season long duel between the two Williams drivers: Brazilian two-time champion Nelson Piquet and British driver Nigel Mansell. The pair won nine of the season's sixteen races in their Williams FW11Bs, although they had only one win from the first five races. Their mid-season dominance eliminated all competition however. Mansell took six wins compared to the more consistent Piquet with three. The increasingly antagonistic duel came to a premature end at the Japanese Grand Prix when Mansell crashed heavily in practice incurring a back injury that put him out for the two races left in the season.

Williams-Honda dominated the Constructors' Championship, claiming 137 points compared to McLaren-TAG on 76 points. Lotus-Honda claimed third in the points resisting a late season charge from Ferrari led by Austrian driver Gerhard Berger who won the final two races of the year in Japan and Australia.

Two new sub-championships were created for the 1987 season. The Jim Clark Trophy for drivers of cars powered by naturally aspirated engines and its parallel championship for constructors, the Colin Chapman Trophy, helped encourage the teams who did not have access to turbocharged engines, while at the same time acknowledging the forthcoming ban on turbos for the 1989 Formula One season. British driver Jonathan Palmer (Tyrrell DG016) won the championship, wrapping it up early in Japan and finishing 21 points ahead of his French teammate Philippe Streiff. As Tyrrell was the only two-car team in the Colin Chapman trophy, they dominated. Philippe Alliot's results in the Larrousse-entered Lola LC87 were sufficient to earn him third place in the Jim Clark Trophy and Lola second in the Colin Chapman Trophy.

1987 saw new rules introduced in an effort to not only make the returning normally aspirated more competitive, but to reduce costs and also slow the cars down with a resultant increase in safety. As part of a two-year plan to phase turbos out of Formula One, the FIA introduced a mandatory pop-off valve to the turbo powered cars which restricted boost to 4.0 bar, thus limiting engine power (one unnamed team manager was heard to remark at the season opener in Brazil that the pop-off valve was "the only crude piece of engineering on a modern Grand Prix car", while another said that the FIA would not get rid of the valves as it would rob them of getting their stickers on the cars for free). However, advances in engine development, aerodynamics, tyres and suspension meant that, despite the turbo limit, the leading teams such as Williams, McLaren and Ferrari regularly recorded faster times than they had in 1986 when turbo boost was unrestricted. The FIA also banned the super soft (and sticky) qualifying tyres in 1987, which eliminated the unpopular practice of having to find a clear lap on tyres which were good for two flying laps at best.

The following drivers and constructors competed in the 1987 season.

Points towards the 1987 FIA Formula One World Championship for Drivers were awarded on a 9–6–4–3–2–1 basis to the top six placed drivers at each round. However, only the best eleven round results were counted towards each driver's championship total.

Awarded to drivers of cars equipped with naturally aspirated engines

Points towards the 1987 FIA Formula One World Championship for Constructors were awarded on a 9-6-4-3-2-1 basis for the top six placed cars at each round. All results were counted (not just best eleven rounds).

† Dalmas's Lola was ineligible for Constructors' Championship points, as the team had entered only one car for the championship.

Awarded to constructors of cars equipped with naturally aspirated engines