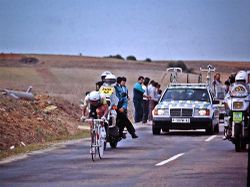 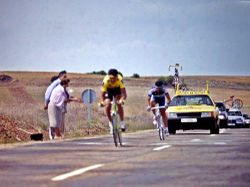 Pedro Delgado had won the previous Tour de France and was seen as the favourite for the race. Delgado came with a Reynolds team that contained Miguel Indurain who had just won Paris–Nice and was also seen as a potential favourite. The first few days of the race saw the leaders jersey change shoulders from Gino de Bakker, Benny van Brabant and Roland LeClercq. The Colombian Omar Hernández took the lead on the fifth stage. On the 11th stage to Cerler, Delgado battled with four Colombians and won the stage. He won the stage 14 time trial where Colombian Martin Farfan took the leaders jersey. On the following stage to Santander, Delgado took the jersey. However Delgados team had a bad day several stages later when Indurain fell and broke his wrist and Delgado had difficulty keeping the jersey from Fabio Parra. Parra was only two seconds behind Delgado on the general classification at one stage. The final time trial was the final chance for Parra to try to take the jersey from Delgado but Delgado won and increased his lead to win his third grand tour.