The 1990 Tour de France was the 77th Tour de France, taking place June 30 to July 22, 1990. The total race distance was 21 stages over 3404 km, with riders averaging 38.62 km/h.[1] American Greg LeMond repeated his 1989 victory in the overall competition, becoming a three-time winner despite not winning an individual stage, something which as of 2014 has happened only once again, in 2006. The surprise of the Tour was Claudio Chiappucci, who won ten minutes in the first stage, and was still leading the race two days before the end.

Differences from the 1989 Tour de France

See also: List of teams and cyclists in the 1990 Tour de France

The 1990 Tour started with 198 cyclists, divided into 22 teams of 9 cyclists:[2] Sixteen teams qualified based on the FICP team ranking,[3] while six teams were given wildcards.[4]

The Alfa Lum team was made out of Soviet cyclists.[5]

The winner of the previous year, Greg LeMond, had for the first time in his career the full support of his team mates Z–Tomasso, however he did not have a great pre-season, being overweight and suffering from mononucleosis.[5] LeMond had won the 1989 UCI Road World Championships, but had not won any race since.[6]

The organising newspaper L'Équipe was expecting a close battle between LeMond and Laurent Fignon, who had finished in second place in 1989, only eight seconds behind LeMond.[6]

Pedro Delgado, the winner of 1988, was part of the strong Banesto team, with Miguel Indurain to help him in the mountains. The fourth favourite was Erik Breukink.[6]

The 1990 Tour de France started on 30 June, and had two rest days. On the first rest day, the cyclists were transferred from Rouen to Strasbourg, on the second rest day the cyclists were in Villard-de-Lans.[7]

In the prologue, LeMond showed that he was in good shape by finishing second, behind specialist Thierry Marie.[5] The first and the second stage were run on the same day, the second stage in the team time trial format. Most cyclists wanted to save energy in the first stage, and Steve Bauer saw this as an opportunity to escape and win enough time to lead the general classification, as he had done in 1988. Similarly, Claudio Chiappucci, who had won the mountains classification in the Giro d'Italia earlier that year, saw it as an opportunity to gain points for the mountains classification, so he could wear the polka-dot jersey as leader for this classification for a few stages, and enjoy the accompanied publicity.[6]

Chiappucci and Bauer escaped early in the stage, and were joined by Ronan Pensec and Frans Maassen. The rest of the peloton allowed them to stay away, so the group finished more than ten minutes ahead of the other cyclists. These four were not considered real favourites for the overall victory, although Bauer and Pensec had already finished in the top ten of the Tour before. Maassen won the stage, and Bauer became the leader of the general classification.[5]

In the next few stages, the four men in the breakaway remained on top of the general classification. In the fourth stage, Robert Millar crashed, and lost nine minutes, putting him out of contention for the overall victory.[5]

The time trial of stage 7 was won by Raul Alcala, with Miguel Indurain in second place. The four men from the breakaway all finished in the top 25, and were still minutes ahead of the rest in the general classification.[5]

In stage ten in the Alps, Thierry Claveyrolat escaped to win points for the mountains classification, and stayed away to the finish, to win the stage. Behind him, Pensec and Chiappucci finished together with the big names, while Bauer and Maassen lost some time. Pensec became the new leader of the general classification.[5]

The eleventh stage was also in the Alps, and the big favourites showed themselves. Bugno won the stage before LeMond and Breukink, but Pensec was only 48 seconds behind, and Chiappucci 86 seconds. Bauer and Maassen lost more than 20 minutes, so after this stage Pensec was leading the general classification, almost one and a half minute before Chiappucci, with LeMond in third place, still more than nine minutes behind.[5]

This was followed by an individual time trial in stage twelve. Pensec could not set a good time, but Chiappucci finished in eighth place, and became the new leader. The winner of the time trial, Breukink, jumped to third place, seven minutes behind Chiappucci, with LeMond now in fourth place, at seven and a half minutes.[5]

In the thirteenth stage, Pensec escaped early in the stage, forcing Chiappucci's team to chase him. When they had finally caught him, LeMond attacked, with Breukink and Delgado following him.[6] Chiappucci's team mates could not help him anymore, Chiappucci was not helped by other teams, and lost almost five minutes. He was still leading the general classification, but now only with a margin of two minutes on Breukink.[5]

Chiappucci understood that he had a chance to win the Tour, but that he would have to show something special. In the sixteenth stage, he escaped, hoping to win time on LeMond and Breukink. Breukink had a bad day, and lost considerable time,[6] but LeMond was able to get back to Chiappucci just before the final climb. At that climb, LeMond left Chiappucci behind. The stage was won by Indurain with LeMond in second place. In the general classification, Chiappucci kept a slim lead of five seconds on LeMond, but a time trial still due, which was LeMond's specialty.[5] 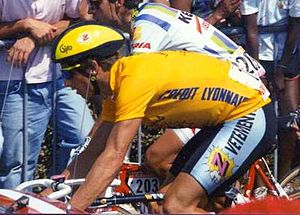 Greg LeMond in the final stage, leading the yellow jersey as leader of the general classification.

In the seventeenth stage, LeMond punctured. Chiappucci and his team mates then increased their speeds (breaking the unwritten rules of not attacking when others have mechanical failures). Some of LeMond's team mates were in a break-away, and they were ordered to wait for LeMond so they could help him. They were not allowed to turn around and ride towards LeMond, so they had to wait for seven minutes until LeMond was with them. The worked together and were able to get LeMond back to Chiappucci, but LeMond was angry at Chiappucci's tactics.[6] The stage was won by Dimitri Konyshev, the first Soviet rider to win a Tour de France stage.[9]

In the last time trial in stage twenty, Breukink won, and as expected LeMond gained enough time on Chiappucci to win the Tour.[5]

The points classification was calculated in another way: the first cyclists to finish in a stage received points, based on their rank and the type of stage. All stages (except time trials) also had one or more intermediate sprints, where some points could be won. The cyclist with the most points lead the classification, and was identified with a green jersey.[10]

Additionally, there was the mountains classification. The organisation had categorized some climbs into categories; points for this classification were won by the first cyclists that reached the top of these climbs first. The cyclist with the most points lead the classification, and was identified with a polkadot jersey.[10]

For the team classification, the times of the best three cyclists per team on each stage were added; the leading team was the team with the lowest total time.[10] The riders in the team that lead this classification wore yellow caps.[11]

There was also the young rider classification. This was decided the same way as the general classification, but only riders born after 1 January 1966 were eligible.