The 1994 Tour de France was the 81st edition of the Tour de France, one of cycling's Grand Tours. The Tour began on July 2 with a 7.2 km (4.5 mi) prologue around the French city Lille. After 21 more days of racing, the Tour came to a close on the street of the Champs-Élysées. Twenty-one teams entered the race that was won by Miguel Indurain of the Banesto team.[1] Second and third respectively were the Latvian Piotr Ugrumov and the Italian rider, Marco Pantani.[2]

Miguel Indurain first captured the lead after the stage 9 individual time trial. Chris Boardman was the first rider to wear the race leader's yellow jersey after winning the opening prologue. Boardman lost the lead to Johan Museeuw after Museeuw's GB–MG Maglificio team won the stage three team time trial. Flavio Vanzella took the lead away from Museeuw the next day as the Tour made its way into Great Britain. Vanzella lost the lead to Sean Yates after the race's sixth stage. Yates led the race for a single day before losing it to Museeuw after the conclusion of stage 7. Museeuw lost the lead to Indurain after the stage 9 individual time trial, who then successfully defended the lead through the Alps and Pyrenees and to the Tour's finish in Paris.

Indurain became the third rider to win four consecutive Tours de France. In the race's other classifications, Team Polti–Vaporetto rider Djamolidine Abdoujaparov won the points classification, Richard Virenque of the Festina–Lotus team won the mountains classification, Carrera Jeans–Tassoni rider Marco Pantani won the youth classification for the best rider aged 26 or under in the general classification after having finished third overall, and Eros Poli of the Mercatone Uno–Medeghini team won the combativity classification. Festina-Lotus won the team classification, which ranked each of the twenty teams contesting the race by lowest cumulative time.

A total of 21 teams were invited to participate in the 1994 Tour de France. Fifteen teams were announced in May, based on their UCI ranking:[3]

Although the organisation had planned to give five additional wildcards in June, after the 1994 Giro d'Italia, it was decided to invite one extra team, and six wildcards were given to:[4]

The Jolly-team of Zenon Jaskula, who had finished in third place in the 1993 Tour de France, was not selected.[4]

Each team sent a squad of nine riders, so the Tour began with a peloton of 189 cyclists. Out of the 189 riders that started this edition of the Tour de France, a total of 117 riders made it to the finish in Paris.[5]

The 1994 edition of the Tour de France began with a short 7.2 km (4.5 mi) prologue that navigated around the French city of Lille. There were a total of six stages that held many high mountains, while there was only one hilly stage that contained climbs of lesser degree. Eleven of the stages were primarily flat stages. The official route contained four time trials, three of which were individual and one of which was a team event.[6]

There were two stages that began or ended outside France. Stage 4 began in the English port town of Dover and ended in Brighton. The fifth stage began and ended in the British city of Portsmouth.

Of the stages that contained mountains, four contained summit finishes: stage 11 to Hautacam, stage 12 to Luz Ardiden, stage 16 to Alpe d'Huez, and stage 17 to Val Thorens. The nineteenth stage, an individual time trial, had a summit finish to Avoriaz. 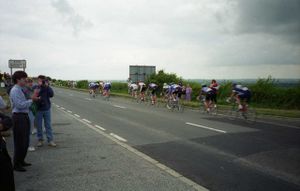 The peloton riding through Great Britain during the Tour's fourth stage.

The 1994 edition of the Tour de France began with a brief 7.2 km (4.5 mi) prologue around the city of Lille.[8] Englishman Chris Boardman set a blistering pace on the course en route to winning the stage by fifteen seconds over the second-place finisher Miguel Indurain.[8] Stage 1 was a relatively flat stage that came down to a bunch sprint that was marred by a large crash.[8] As the riders were sprinting to the finish line, a policeman leaned out to take a photograph causing Wilfried Nelissen to slam on his brakes and crash into the policeman while also taking out Laurent Jalabert in the process.[8] Djamolidine Abdoujaparov ultimately won the stage while Jalabert and Nelissen were forced to drop out of the race due to the injuries they had sustained.[8]

There was also a mountains classification. The organisation had categorized some climbs as either hors catégorie, first, second, third, or fourth-category; points for this classification were won by the first cyclists that reached the top of these climbs first, with more points available for the higher-categorized climbs. The cyclist with the most points lead the classification, and was identified with a polkadot jersey.[9]

For the team classification, the times of the best three cyclists per team on each stage were added; the leading team was the team with the lowest total time.[10]