The 1996 National Convention of the U.S. Democratic Party was held at the United Center in Chicago, Illinois from August 26 to August 29, 1996. President Bill Clinton and Vice President Al Gore were nominated for reelection. This was the first national convention of either party to be held in Chicago since the disastrous riots of the 1968 Democratic convention. 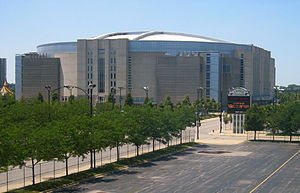 Chicago, Los Angeles, New Orleans, New York, and San Antonio were originally considered as possible host cities. On August 4, 1994, it was announced that Chicago had beaten out the other finalist, San Antonio, for the right to host the convention.[1] This would mark the first time that Chicago hosted a major presidential year political convention since the violent 1968 Democratic National Convention.

Clinton's speech on August 29 included his vision for the next decade, included tax cuts for the middle-class, 20 million more jobs, a strong defense with cuts in the military, but a strong presence of peacemaking troops, new military weapons and tanks, welfare reform goals for states and communities, and a peaceful transition for the Middle East.

Lyndon LaRouche has run for president through multiple parties over multiple election cycles. In 1996, he ran for the nomination of the Democratic party, despite the Chair of the Democratic National Party ruling that Lyndon LaRouche "is not to be considered a qualified candidate for nomination of the Democratic Party for President" before the primaries began. In subsequent primaries LaRouche received enough votes in Louisiana and Virginia to get one delegate from each state. When the state parties refused to award the delegates, LaRouche sued in federal court, claiming a violation of the Voting Rights Act. After losing in the district court, the case was appealed to the First District Court of Appeals, which sustained the lower court.[2]

Clinton was nominated unanimously for a second term and Vice President Al Gore by voice vote.

Clinton and Gore went on to defeat Senator Bob Dole of Kansas and Jack Kemp in the November general election in an Electoral College landslide with a substantial popular vote margin.

The original Broadway cast of Rent performed "Seasons of Love" at the end of the Convention.

Al Gore famously danced to the Macarena while standing still.

Taste of Chicago, a group of fancy restaurants who have an annual street festival, catered the press area.