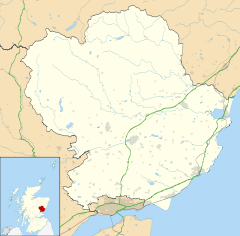 Paul Lawrie won his only major championship in a playoff over Jean van de Velde and Justin Leonard.[2] Lawrie, down by ten strokes at the start of the fourth round,[3] completed the biggest final round comeback in major championship history,[4][5] headlined by van de Velde's triple-bogey at the last hole.[6]

Van de Velde, who was in control through the latter half of the championship, held a seemingly insurmountable three-stroke lead going into the 72nd hole.[7] He teed off with a driver, which was heavily criticized by the ABC broadcast team, and pushed his shot into the right rough of the 17th hole. He later claimed that he thought the lead was only two strokes, which is why he chose not to go with a safe club, such as an iron. His second shot landed in an area of knee-deep rough after his ball bounced backward 50 yards off the grandstand and off of a rock in the Barry Burn. Had the ball stayed in the grandstand he would have been able to drop without penalty. Then the thick Carnoustie grass stifled him again, as his third shot went into the burn in front of the green. Van de Velde took his shoes and socks off and entered the burn, considering an attempt to play the ball from the water. He decided against it and instead took a drop (fourth stroke), at which point he hit his fifth shot into one of the deep greenside bunkers. He pitched out safely and buried an eight footer on his seventh shot for a triple-bogey. This forced the three-man playoff, which he eventually lost.[8][9]

Due to the three-stroke lead van de Velde had going into the final hole, his name had already been engraved into the Claret Jug. Following his collapse, the engraver had to scratch through van de Velde's name and then engrave Paul Lawrie's name into it. Beginning with the 2000 Open, the winning golfer's name is no longer engraved into the Claret Jug until after his scorecard is verified by tournament officials and signed by said winning golfer.[citation needed] Van de Velde's play on this hole is still widely considered[9] to be the worst "choke" in golfing history, and some have even used the term "pulling a van de Velde" to describe similar events.[10]

Paul Lawrie completed the biggest final round comeback in major championship and PGA Tour history by coming back from 10 strokes behind in the final round, and winning the subsequent three-man playoff.[2][3][6]

Jean van de Velde started the day with a five-stroke lead over Craig Parry and Justin Leonard, but trailed Parry by a stroke at the 12th hole, as Parry was –3 for the day through 11, while Van de Velde was +3. However, Parry could not escape the thick rough on the 12th hole on his way to a triple bogey while Van de Velde regained sole possession of the lead with a bogey. Parry then bogeyed 13, drove into the fairway bunker at 14 to deny himself a birdie chance, and missed a two-foot (0.6 m) putt on 17 en route to a double bogey. He holed a bunker shot on 18 to finish one stroke out of the playoff.

In the meantime, Leonard tied van de Velde for the lead with a birdie on 14, but made bogeys at 15 and 18 as his second shot landed in the barry burn as Van de Velde birdied 14 - leaving him three strokes behind, tied with Lawrie in the clubhouse at 6-over-par. Ángel Cabrera had a chance to join the clubhouse lead but lipped out a birdie putt on 18.

After the birdie on 14, Van de Velde missed the next three greens but got up-and-down each time to give himself a three stroke lead going into 18 where a triple bogey dropped him into a playoff.

The four-hole playoff was played on the final four holes (#15-18), three par fours and one par three (#16). All three players hit poor drives on the first playoff hole, but Van de Velde was forced to take an unplayable and took double bogey to fall one stroke behind Lawrie and Leonard. All three players missed the green on the second playoff hole and took bogeys. On the third playoff hole, Van de Velde made birdie to briefly create a three-way tie, but Lawrie followed with a birdie of his own to take a one-stroke lead into the final playoff hole. On the final playoff hole, Van de Velde found the rough and Leonard found the water en route to bogeys while Lawrie hit a shot for the ages, a 4-iron to four feet for a clinching birdie and the championship.