The 2000 National Convention of the Republican Party of the United States convened at the First Union Center (now the Wells Fargo Center) in Philadelphia, Pennsylvania, from July 31 to August 3, 2000. The 2066 delegates assembled at the convention nominated Texas Governor George W. Bush for President and former U.S. Secretary of Defense Richard B. "Dick" Cheney for Vice President. 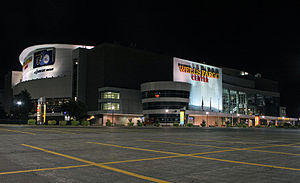 The First Union Center, now known as the Wells Fargo Center, was the site of the 2000 Republican National Convention

Bush, eldest son of the 41st president, was identified early as the party establishment's frontrunner and turned back a strong primary challenge from John McCain, a Vietnam War veteran and U.S. Senator from Arizona. At the convention, the party and campaign sought to showcase Bush's slogan of compassionate conservatism to persuade undecided voters.

Instead of holding the roll call of states on one night, the Bush campaign arranged for the voting to take place over four nights, so that Bush would eventually build up support throughout the week, culminating with Cheney's home state of Wyoming finally putting him over the top on the final night. There were few defections, despite a large contingent of delegates having been elected to support McCain, who formally released them to Bush.