The 2001 Canadian Grand Prix (formally the XXXIX Grand Prix Air Canada) was a Formula One motor race held at Circuit Gilles Villeneuve, Montreal on June 10, 2001. It was the eighth round of the 2001 Formula One season. The race, contested over 69 laps, was won by Ralf Schumacher driving for the Williams team. Michael Schumacher finished second, driving a Ferrari car, with Mika Häkkinen third for the McLaren team. Ralf Schumacher's win was his second of the season and also marked the first time that two brothers finished first and second in a race.

As a consequence of the race, Michael Schumacher extended his lead in the Drivers' Championship to 18 points over David Coulthard. In the Constructors' Championship, Ferrari extended their lead over McLaren to 34 points. 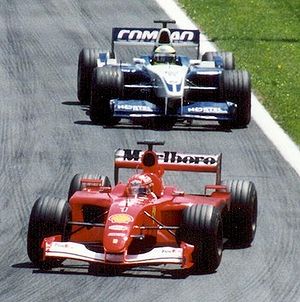 Michael Schumacher leads brother Ralf during the first part of the race.

This race created history for it was the first time two brothers finished first and second in a race.[2]

This time Michael Schumacher was out-raced by his younger brother Ralf who had a much more powerful car for this race.

However, with Michael finishing second it only strengthened his championship lead after his nearest challenger David Coulthard retired with mechanical problems.

It was a thrilling battle between the two brothers, Michael lead away at the start, but there was problems behind when Fisichella broke his suspension on the back of his team-mate, then Eddie Irvine clashed with Nick Heidfeld, both were out.

Then about 20 laps into the race Montoya crashed into the wall and Barrichello also crashed trying to avoid him, his traction control wasn't working which didn't help, this brought out the safety car briefly while the wreck was cleared.

The race was decided when Ralf Schumacher drove a series of stunning laps after Michael had pitted, so when Ralf came in he was a long way ahead.

Ralf Schumacher cruised home to take his second win of the season with his brother Michael Schumacher coming home second, history was made, it was a first podium of the season for double world champion Mika Häkkinen who benefited from the high amount of retirements, it was still a subdued Flying Finn though.

Towards the end the Arrows team looked likely to score a valuable point but Jos Verstappen crashed when his brakes failed.

It was also jubilant scenes at Prost when Jean Alesi finished 5th then threw his helmet into the crowd after the race.

File:First lap 2001 Canada.jpg
Jarno Trulli leads the midfield on the first lap of the race.