The 2001 European Grand Prix (formally the XLV Warsteiner Grand Prix of Europe) was a Formula One motor race held on 24 June 2001 at the Nürburgring, Nürburg, Germany. It was the ninth race of the 2001 Formula One season. The race, contested over 67 laps, was won by Michael Schumacher driving for Ferrari after starting from pole position. Juan Pablo Montoya finished second driving for Williams, with David Coulthard third driving for McLaren.

The race was Michael Schumacher's fifth win of the season, his third at the Nürburgring, and the result meant that he extended his lead in the Drivers' Championship to 22 points over Coulthard and 36 ahead of Rubens Barrichello. Ferrari maintained their lead in the Constructors' Championship, 41 points ahead of McLaren and 57 ahead of Williams, with 8 races of the season remaining.

Following the Canadian Grand Prix on June 10, the teams conducted testing sessions at the Silverstone circuit from June 12–14.[3] Jarno Trulli (Jordan) set the fastest time on the first day with Olivier Panis (BAR) topping the second day's running, setting a time of 1:22.803 and test driver Alexander Wurz (Benetton) was fastest on the final day, setting a time of 1:22.081, over six-tenths of a second faster than Häkkinen.[3]

There was one driver change heading into the race. Having missed the previous Grand Prix due to an headache and dizziness resulting from a crash at the Monaco Grand Prix, Jordan driver Heinz-Harald Frentzen was declared fit to race by the FIA Medicial Delegate Sid Watkins and returned to his seat taken over by temporary replacement Ricardo Zonta. Similarly, Jaguar driver Eddie Irvine was suffering from a strained neck and Sauber driver Nick Heidfeld was suffering from headaches; both were passed fit to race.[4] On June 22, the day of the event's first free practice sessions, Williams confirmed the team would retain Ralf Schumacher until 2004.[5]

In technical developments, Benetton announced that the team would use traction control on both their cars, which were tested during the Friday practice sessions.[6]

File:Eddie Irvine.jpg
Eddie Irvine (pictured in 1998) completed minimal running during the Friday practice sessions due to a problem with his Jaguar car

Four practice sessions were held before the Sunday race—two on Friday, and two on Saturday. The Friday morning and afternoon sessions each lasted an hour. The third and final practice sessions were held on Saturday morning and lasted 45 minutes.[7] The Friday practice sessions were held in overcast conditions, clearing up later in the day. Coulthard was fastest in the first session, with a time of 1:16.888, one-tenth of a second ahead of his teammate Häkkinen. The two Ferrari drivers were third and fourth; Michael Schumacher ahead of Barrichello. Trulli set the fifth fastest time, with Kimi Räikkönen and Panis, sixth and seventh fastest respectively, their best times one-thousandth of a second apart. Panis' team-mate Jacques Villeneuve was eighth fastest. Heidfeld and Ralf Schumacher, completed the top ten. Irvine's Jaguar car was afflicted with a problem on his out-lap; this prevented him from setting a timed lap.[8]

In the second practice session, Häkkinen set the quickest lap of the day, a 1:16.408; Coulthard finished with the second fastest time. The Williams drivers were running quicker—Ralf Schumacher in third and Juan Pablo Montoya in sixth—they were separated by the Ferrari pair of Michael Schumacher and Barrichello, in fourth and fifth respectively. They were ahead of Trulli, Heidfeld, Jean Alesi and Panis.[9]

The Saturday morning practice sessions were again held in overcast conditions, albeit with scattered sunshine. In the third practice session, Michael Schumacher set the session's fastest time with a lap of 1:16.308, almost three-tenths of a second faster than Ralf Schumacher. The McLaren drivers ran slower—Häkkinen ahead of Coulthard. Barrichello and Montoya rounded off the top six positions.[10] In the final practice session, Ralf Schumacher was fastest, setting a time of 1:15.355, almost four tenths of a second faster than Montoya. Barrichello set the third fastest time, with Häkkinen and Coulthard fourth and fifth respectively. Michael Schumacher, who set the sixth fastest time, suffered from an hydraulic problem, thus limited his running.[11]

"After losing half the morning with a hydraulic problem, we were not sure what to expect in qualifying, as I did not have time to run new tyres in the morning. It turned out that the car was well set-up for qualifying. I do not expect to see a repeat of Canada tomorrow, as our tyres are very good and consistent here. I think we have the better tyre for the weekend, but we will have to see what happens. I am not ruling out McLaren, because we have seen them struggle in qualifying before and then they are strong in the race. We developed the car well in the morning and during qualifying we made a further set-up change in between the runs and that made me quicker."

Saturday's afternoon qualifying session lasted for an hour. During this session, the 107% rule was in effect, which necessitated each driver set a time within 107% of the quickest lap to qualify for the race. Each driver was limited to twelve laps.[7] Michael Schumacher clinched his seventh pole position of the season, with a time of 1:14.960. He was joined on the front row by Ralf Schumacher, who was two tenths of a second behind.[13] Montoya qualified in third ahead of Barrichello, who took fourth after struggling with his car's power steering early in the session. Coulthard and Häkkinen filled the third row of the grid, their best times six thousands of a second apart. The Jordan and Sauber drivers rounded out the top ten positions. Villeneuve qualified in 11th, was quicker than his team-mate Panis in 13th. The Arrows and Minardi drivers qualified at the back of the grid, covering positions 18 to 22, with Jenson Button.[14] 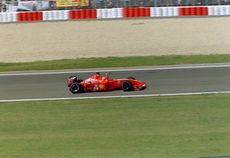 Michael Schumacher, who took pole position and won the race by 4.1 seconds

The conditions were dry and sunny for the race with the air temperature ranging from 21 to 22 °C (70 to 72 °F) and the track temperature between 30 and 32 °C (86 and 90 °F);[15] conditions were expected to remain consistent, although a 20% chance of rain was forecast.[16] The drivers took to the track at 09:30 (GMT +1) for a 30-minute warm-up session.[7] Both Ferrari cars maintained their good performance from qualifying; Barrichello had the fastest time of 1:18.209; Michael Schumacher was second in the other Ferrari car. Ralf Schumacher was just off Michael Schumacher's pace, with Irvine rounding out the top four.[17]

The race started at 14:00 local time.[7] A total of approximately 150,000 spectators attended the race.[18] Whilst on a reconnaissance lap, Michael Schumacher, driving a spare Ferrari car, failed to make the grid for which he commandeered a motor scooter back to the pit lane and took his racing car to the grid.[19] Tarso Marques, from 22nd on the grid, stalled his Minardi car at the start of the formation lap.[20] At the start, Michael Schumacher, Ralf Schumacher and Montoya all maintained their grid positions. Behind the leading trio, Barrichello made the worst start of the grid, moving from 4th to 7th place. Jos Verstappen, from 19th on the grid, made the best start, moving up five places to 14th position.[21] At the completion of the first lap, Michael Schumacher led from Ralf Schumacher, Montoya, Coulthard, Häkkinen, Trulli, Barrichello, Heidfeld, Räikkönen and Frentzen.[16]

As Michael Schumacher extended his lead, the stewards informed the Williams team that Ralf Schumacher would be served with a 10-second stop-go penalty. Ralf Schumacher took his penalty on Lap 39 and dropped from 2nd to 4th position.[16]

"Nothing better can happen than winning your home Grand Prix. We have had a superb weekend, we got pole position, we got the win, we had a nice race again together, Ralf and myself, until the stop and go, so it was quite an entertaining weekend - a tough weekend as well. Because in the end Juan Pablo was coming and pushing, so in this respect, we are very delighted to have finished where we did."

Michael Schumacher, speaking during the post-race FIA press conference for the podium finishers.[23]

The top three drivers appeared on the podium and in the subsequent press conference. Michael Schumacher said was delighted with his race victory. He also revealed that Ferrari were doubtful about racing the spare car which was to be used for one installation lap.[23]

The race result left Michael Schumacher extending his lead in the Drivers' Championship with 68 points. Coulthard's was second on 44 points, eighteen points ahead of Barrichello and nineteen ahead of Ralf Schumacher. In the Constructors' Championship, Ferrari maintained their lead with 94 points, McLaren maintained second with 53 points, and Williams remained third on 37 points, with 8 races of the season remaining.