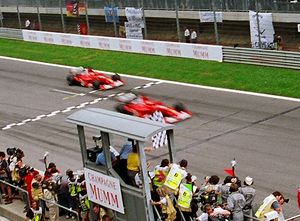 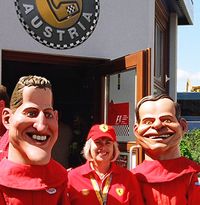 The lighter side of Ferrari at the Grand Prix

The 2002 Austrian Grand Prix was a Formula One race held on 12 May 2002, at the A1-Ring. It was the sixth round of the 2002 Formula One season. This race saw a staged finish, in which race leader Rubens Barrichello was ordered to allow Ferrari teammate Michael Schumacher to overtake him and win the Grand Prix. Ferrari wanted their number one driver Schumacher to win the race and collect the maximum points for the Drivers' Championship.[2] Barrichello let him pass on the last lap at the finish line which greatly upset the spectators. Barrichello had also yielded second place to Schumacher at the line in the previous year's event.

On the podium, in response to the jeers of the crowd, Schumacher insisted that Barrichello take the top spot on the podium. Schumacher took the trophy for first place from the Austrian chancellor and gave it to Barrichello, who then took the second place trophy. Barrichello, Schumacher and Ferrari were fined one million U.S. dollars for the failure to observe Article 170 of the Formula One Sporting Regulations concerning the podium ceremony.[3] As a result of this, and another incident at the United States Grand Prix, the FIA declared new rules against team orders which would artificially affect race results.

The race also featured a huge accident between Takuma Sato and Nick Heidfeld. Heidfeld lost control over his car due to a rear suspension failure on the way into a corner, causing it to spin across the infield and back across the circuit, spinning backwards into the side of Sato's car. Sato suffered minor injuries but got stuck in the wreckage and it took several minutes for the track marshals to cut him out from the vehicle.

Rubens Barrichello grabbed his second pole position of the season by beating last year's pole time by 1.5 seconds, and beating his team-mate Michael Schumacher by over 0.6 seconds. Ralf Schumacher split the two Ferraris and Juan Pablo Montoya qualified 4th despite having to use the spare car. Nick Heidfeld in the improved Sauber managed to qualify in 5th ahead of Kimi Räikkönen in the McLaren. Felipe Massa took 7th ahead of David Coulthard. Olivier Panis and Mika Salo completed the top 10.

Fourth to eighteen positions were covered by a gap of only 0.94 seconds.