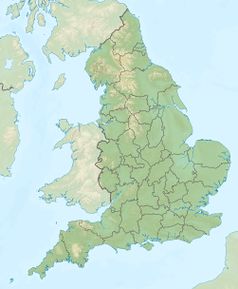 The Belfry
Location in England

The 34th Ryder Cup Matches were held 27–29 September 2002 in England, on the Brabazon Course at The Belfry in Wishaw, Warwickshire (near Sutton Coldfield).

The European team won the competition by a margin of 15½ to 12½, the largest margin of victory in the Ryder Cup since the European team won 16½ to 11½ in 1985, also played at The Belfry. Both teams were tied at 8 points going into the Sunday singles matches. Sam Torrance had put most of his best players out early while Curtis Strange had opted to do the opposite. Momentum swung for Europe and after Phillip Price defeated Phil Mickelson 3 & 2, Europe needed ½ point for victory. The decisive ½ point was secured by Paul McGinley in his match against Jim Furyk after he holed a 10-foot par putt on the 18th hole.[1]

The victory prompted Tony Blair, then British Prime Minister to joke in his speech at the following week's Labour Party conference: "What about the Ryder Cup, eh? Britain in Europe at its best. Me and George Bush on opposite sides".[2]

The event was originally scheduled for 28–30 September 2001 but was postponed for a year on 16 September following the September 11 attacks. "The PGA of America has informed the European Ryder Cup Board that the scope of the last Tuesday's tragedy is so overwhelming that it would not be possible for the United States Ryder Cup team and officials to attend the match this month."[3] The manager of Phil Mickelson and Mark Calcavecchia had earlier announced that the two players would not travel to Europe. Other American players were said to be concerned about attending the event. It was agreed that the same captains and players would participate in the 2002 event.

It was later decided to thereafter play matches in even-numbered years instead of odd-numbered, pushing the already-scheduled 2003, 2005, 2007, 2009 and 2013 editions to 2004, 2006, 2008, 2010 and 2014 respectively. This in turn caused a corresponding change in schedules for the Presidents Cup, Solheim Cup and Seve Trophy (all of which are played in years the Ryder Cup is not played). The Presidents Cup was in turn delayed by a year, while both the Solheim Cup and Seve Trophy played their 2002 matches as scheduled then subsequently started playing in odd-numbered years in 2003. The Junior Ryder Cup, which was also scheduled for 2001, was also postponed to 2002.[4]

This was the second of five consecutive victories at home by Europe, a streak that remains intact through 2014.

Domestic television coverage was provided by BBC and Sky Sports.

The Ryder Cup is a match play event, with each match worth one point. The competition format used from 1991 to 2002 was as follows:

This was the first Ryder Cup in which U.S. citizens born outside the country were eligible for selection on Team USA.[5] More specifically, two categories of U.S. citizens became eligible:

However, this change has yet to have any effect; all Team USA players through the 2014 Ryder Cup have been born in the country.