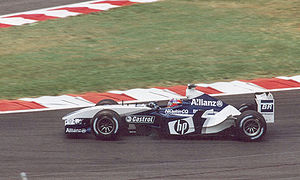 Juan Pablo Montoya finished 2nd and set the fastest lap of the race. 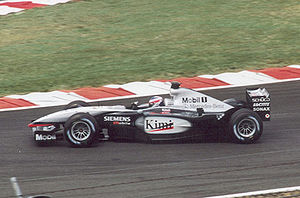 The 2003 French Grand Prix (formally the Mobil 1 Grand Prix de France) was a Formula One motor race held on 6 July 2003 at the Circuit de Nevers Magny-Cours. It was the tenth race of the 2003 Formula One season. The race, contested over 70 laps, was won by Ralf Schumacher driving for the Williams team after starting from pole position. Juan Pablo Montoya finished second in the other Williams car, with Michael Schumacher third driving for Ferrari. Ralf Schumacher's victory was his second consecutive win of the season having won the preceding European Grand Prix at the Nürburgring.

This was the first French Grand Prix held at the upgraded version of Magny-Cours, having made Château d'Eau a sharper right hand corner, and a complete modification of the Lycée section, becoming a very sharp right hand turn after the back straight which then leads to a difficult final chicane next to the pit entrance. The pit lane was also significantly shortened as a result of the upgrades.