The 2004 Republican National Convention, the presidential nominating convention of the Republican Party of the United States, took place from August 30 to September 2, 2004 at Madison Square Garden in New York City, New York. The convention is one of a series of historic quadrennial meetings at which the Republican candidate for President of the United States and party platform are formally adopted. Attendance included 2,509 delegates and 2,344 alternate delegates from the states, territories and the District of Columbia. The convention marked the formal end of the active primary election season.

The theme of the convention was "Fulfilling America's Promise by Building a Safer World and a More Hopeful America." Defining moments of the 2004 Republican National Convention include a featured keynote address by Zell Miller and the confirmation of the nomination of President George W. Bush and Vice President Dick Cheney for reelection. Bush and Cheney faced the Democratic Party's ticket of John Kerry and John Edwards in the 2004 presidential election.

Apart from nominating a candidate for President and Vice President, the 2004 Republican National Convention was also charged with crafting an official party platform and political agenda for the next four years. At the helm of the Platform Committee was United States Senator and Senate Majority Leader Bill Frist of Tennessee, Congresswoman Melissa Hart of Pennsylvania and Colorado Governor Bill Owens. The committee worked with the Bush campaign to develop the draft platform. 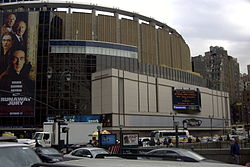 The choice of Madison Square Garden on January 31, 2003 by all 165 members of the Republican National Committee as the venue for the 2004 Republican National Convention meant that New York City would host a major Republican nominating convention for the first time in the nation's history. On July 19, control of Madison Square Garden was officially handed over to the Republican Party under the administration of Chief Executive Officer of the Convention, Bill Harris. Mayor Michael Bloomberg thanked the party for their choice, for which he had vigorously lobbied, noting it as a significant display of support for the city and an economic boom.

Like the 2004 Democratic National Convention in Boston, Massachusetts, the Department of Homeland Security (DHS) officially declared the 2004 Republican National Convention a National Special Security Event (NSSE). As such, the United States Secret Service was charged with employing and coordinating all federal and local agencies including the various bureaus of DHS, the FBI, and the NYPD to secure the venue from terrorist attacks. Expected security expenditures reached $70 million, $50 million of which was funded by the federal government.

The city employed an active beat of 10,000 police officers deployed as Hercules teams—uniformed in full riot gear and body armor, and equipped with submachine guns and rifles. Commuter and Amtrak trains entering and exiting Penn Station were scoured by bomb-sniffing dogs as uniformed police officers were attached to buses carrying delegates. All employees of buildings surrounding Madison Square Garden were subjected to thorough screening and background checks.

The NYPD infiltrated and compiled dossiers on protest groups (most of whom were doing nothing illegal), leading to over 1,800 arrests and subsequent fingerprinting.[1]

The convention took place in New York City a week before the third anniversary of September 11. The attacks were a primary theme of the convention, from the choice of speakers to repeated invocations of the attacks. At the convention, there was a performance of "Amazing Grace" by Daniel Rodriguez, a tribute to those killed on September 11. Relatives of three of the victims spoke and talked about how September 11 brought the country together. Also contributing musically were Brooks & Dunn, Sara Evans, Lee Ann Womack, Darryl Worley.

Early in the summer leading up to the 2004 Republican National Convention, Republican National Committee Chairman Ed Gillespie announced the first slate of convention speakers. He added, "It is an honor to announce the addition of these outstanding Americans to the 2004 Republican National Convention program. For the past three and a half years, President Bush has led with strength and compassion and these speakers reflect that." Chief Executive Officer of the Convention Bill Harris commented, "These speakers have seen President Bush's strong, steady leadership and each will attest to his character from a unique perspective. Their vast experience and various points of view are a testament to the depth and breadth of the support for the Republican ticket in 2004."

Considered to be one of the most interesting choices for speakers at the convention was a keynote address by Georgia Senator Zell Miller, a conservative Democrat. Miller had consistently voted with Republicans. In a Wall Street Journal editorial Miller cited that the reason for his defection was that, "I barely recognize my party anymore." He continued, "Today, it's the Democratic Party that has mastered the art of division and diversion. To run for president as a Democrat these days you have to go from interest group to interest group, cap in hand, asking for the support of liberal kingmakers." He finished by saying, "I still believe in hope and opportunity and, when it comes right down to it, Mr. Bush is the man who represents hope and opportunity."

His keynote address was a visceral smite to Democrats and an excoriating attack on John Kerry, blaming him for the divisions in America. Notably, he mocked Kerry's call for strength in the armed forces by noting several important military projects that Kerry had opposed, saying that Kerry wanted "forces armed with what - spitballs?" Including Senator Edward Kennedy of Massachusetts, he claimed "no pair has been more wrong, more loudly, more often, than the two senators from Massachusetts: Ted Kennedy and John Kerry."

In his speech, Miller also heaped his praise for 1940 Republican Presidential nominee Wendell Wilkie for supporting President Roosevelt's establishment of a military draft, raising concerns about the intentions of President Bush in this area.

Zell Miller also delivered the keynote address on behalf of Bill Clinton in 1992 at Madison Square Garden. He remained a Democrat in the Senate until leaving in 2005 (he was not running for reelection). However, after this address, his affiliation with the national Democratic Party was unquestionably over.

Nancy Reagan's spokesperson announced that the former First Lady fully supported President Bush for the general election. The spokesperson added that while the former First Lady and her children would be absent from the 2004 Republican National Convention, President Reagan's son with Jane Wyman, Michael Reagan, had accepted an invitation to address the delegates. Nancy Reagan appeared in the filmed tribute he introduced. He dedicated the film to everyone who helped make his father president of the United States.

President Bush was nominated at the end of a "rolling roll call" that had started the day before, when Pennsylvania's delegation cast the deciding votes.[2]

John Kerry believes that government can spend our money better than we can. But most Americans don't share this view. That's why John Kerry has to preach the politics of division, of envy and resentment. That's why they talk so much about two Americas. But class warfare is not an economic policy. And the politics of division will not make America stronger, and it will not lead to prosperity.'" Paul Ryan

According to Rasmussen weekly tracking polls, Bush led Kerry by 0.3% on the poll released August 26. On September 2, Bush's lead had increased to 2.5%. On September 9, the lead had decreased to 1.3%. Bush would maintain his leads throughout the fall.[4] 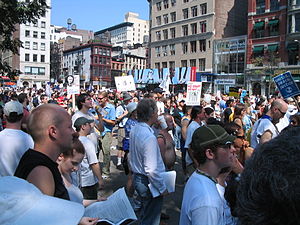 Protesters gather in Union Square for a march

Protest activity included marches, rallies, performances, demonstrations, exhibits, and acts of civil disobedience in New York City to protest the 2004 Republican National Convention and the nomination of President George W. Bush for the 2004 U.S. presidential election, as well as a much smaller number of people who marched to support Bush at the convention.